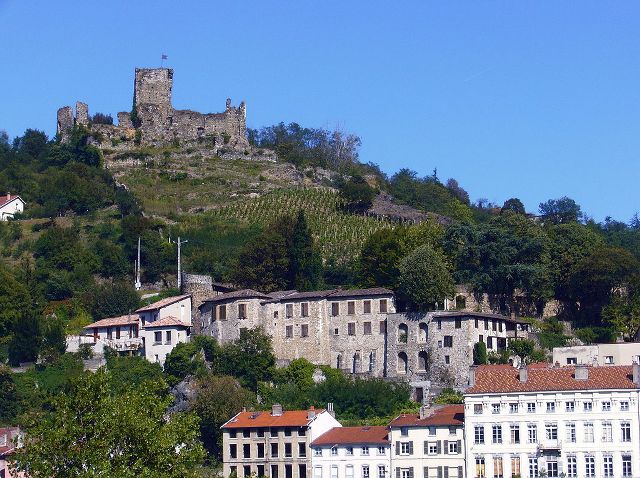 Location: Vienne, in the Isère departement of France (Rhone-Alpes Region).
Built: 13th century.
Condition: Ruins.
Ownership / Access: Privately owned.
ISMH Reference Number: PA00117321
Notes: Château de la Bâtie is an ancient castle of the thirteenth century, the ruins stand in the town of Vienne in the Isère department and the Rhône-Alpes region. The castle is the subject of a registration as a historic monument by decree of 10 December 1926. According to tradition, the Romans had fortified Mount Solomon, and the remains of the Roman fort were reused during the Middle Ages . But it was Archbishop John of Bernini is considered the manufacturer of Built, 1225. The castle Built served as residence for archbishops of Vienna until the mid-fourteenth century, when peace returned, they gradually spurned his residence and neglected maintenance of the fortress fell to the simple rank Royal prison. Renovated in part in 1450 by the Dauphin Louis, it was Francis who, to meet Charles V gave back the ramparts of the city and the Built shouldered by the erection of the "bastion" Saint-Anne in 1538. very damaged during the religious wars the castle was put out of use at the same time as that of Pipet, in execution of a judgment of the Council of State 26 January 1633 concerning the demolition of forts du Dauphiné on order of Richelieu.