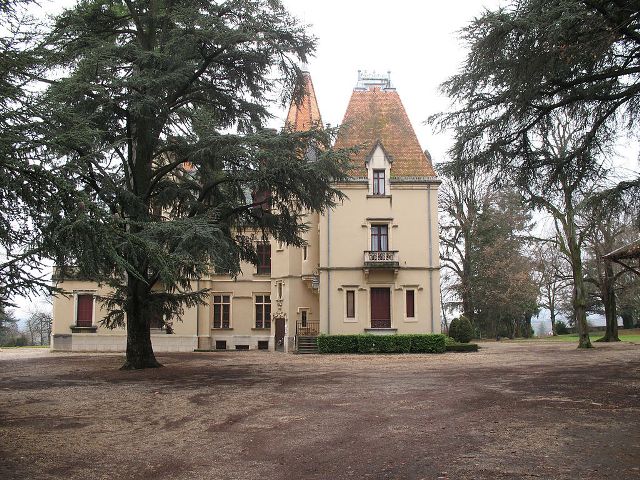 Location: Liergues, in the Rhône departement of France (Rhone-Alpes Region).
Built: 19th century.
Condition: In good condition.
Ownership / Access: Private property.
Notes: Château de l'Éclair is located in the Beaujolais region, north of the town of Liergues, in the Rhône department. The name day is associated with that of the day-Vermorel, the name given by its inventor in 1884 to tin to sulphate vineyards. Another story is related in the name of the castle. The daughter of Mr. Vermorel was struck by lightning on a stormy day in the park, a rather tragic story.The castle, which dates from the late nineteenth century, is a neo-Gothic building. The area is private property. It does not visit.1871. The owner, Mr. Guinon, Lyon chemist completes the construction. His brother had his side gained Castle Boisfranc, nearby castle. Guinon the family specialized in coloring Lyon silks (based process picrite acid). At that time it was called Castle Convert, hamlet called and already grouped few hectares of vines. 1891: Victor Vermorel (1848-1927), the inventor acquires after the great crisis phylloxera ownership and continuing research on the vine and wine. It performs important work in the winery and in the vineyards. 1932 The primary fund capitalization of social mutuality retirement disability, having good buyer reach, delegates management to the General Union of the Rhone mutuality. 1934: A convalescent home and health colony are created. 1979: The hotelier technical training center founded by the Japanese Shizuo Tsuji moved to the Lightning. 1993 Yoshiki Tsuji succeeded his father; The castle also houses a research organization applied in the field of viticulture marketing the wines of the area: the Sicarex Beaujolais. The estate now covers 19 hectares, producing a range of 9 different wines: Beaujolais, Beaujolais Nouveau Beaujolais rosé, white Beaujolais, Beaujolais Villages, oak, Crémant de Bourgogne sparkling Red Gamaret. This area is often recognized for the quality of its wines.

How To Get To Château de l'Éclair (Map):