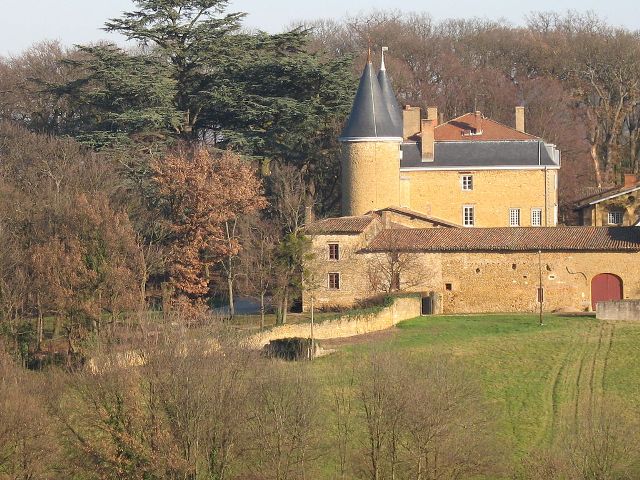 Location: Marcilly-d'Azergues, in the Rhône departement of France (Rhone-Alpes Region).
Built: 12th century.
Condition: In good condition.
Ownership / Access: --
Notes: Château de Janzé is an ancient castle of the twelfth century, rebuilt in the eighteenth century, which stands on the town of Marcilly-d'Azergues in the Rhône department in Auvergne region Rhône-Alpes.The twelfth to the sixteenth century, different families have owned Janzé. In the twelfth century, the fief belonged to Ulric Anseu. In the thirteenth century, Pierre Anseu sells the manor to Albert Guizeu, monk of the Abbey Ainay. Albert's nephew, Stephen of Guizeu, inherits the property. His son, Albert Guizeu, tests in 1340. In 1450, lady Alisette Verd, Poilfort widow of Guizeu, tests for the knight Ame Verd, his brother. Philippe Saint-Trivier tests in 1536. The seventeenth and eighteenth centuries, several characters succeed in Janzé: in 1616 (deed), René Chausse, Doctor of Law; in 1658 (deed) of Honoraty Bartholomew, who rebuilt the castle; in 1698 (deed), Claude Carret, bourgeois of Lyon; in 1719 (deed), Camille Gemini, first secretary of the Marshal Villeroy; Pierre Cizeron, bourgeois of Lyon; in 1729, by marriage, John Clerico; by inheritance, Peter Gabriel Clerico, who enlarged the property; François Boulard of Gatellier, adviser to the Parliament of Burgundy, whose family still owns the domain.The current castle, there are still parts of the twelfth and fifteenth centuries, and common date from the seventeenth century. In the early eighteenth century, the alterations were made and the property was enlarged, including successively Pitrat areas (1774), Bouvet (1776) and Bottières (1780). The construction consists of a rectangular plan of the main building, two floors with five bays, and an attic floor with a broken tiled roof and slate. The main façade in the northwest, is flanked by two round towers topped with pointed roofs slate, and is decorated with two legs bounding the central body crowned by a pediment. Common prolonging the towers on the east and west, delimit three courses in one of which is a chapel built in the eighteenth century. The park covers 10 hectares.

How To Get To Château de Janzé (Map):