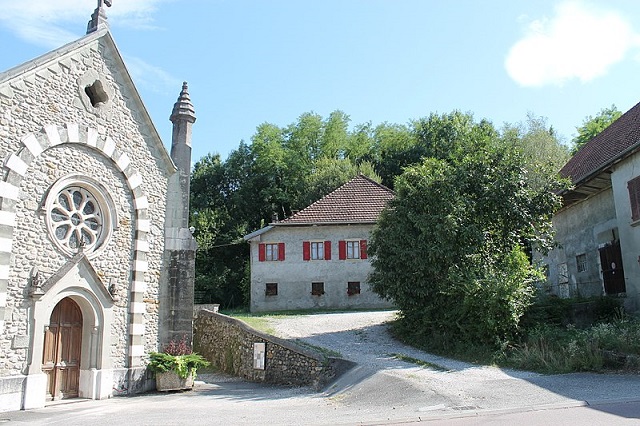 Location: Hauteville-sur-Fier, in the Ain departement of France (Rhone-Alpes Region).
Built: 12th century.
Condition: Ruined.
Ownership / Access: --.
Notes: The château de Hauteville (castle of Alta villa, Alteville) is a former castle of the early twelfth century, now extinct, which stood on the commune of Hauteville-sur-Fier in the Haute-Savoie department, In the Auvergne-Rhône-Alpes region.The castle of Hauteville, located in Albanian, was installed on a promontory (altitude of 385 meters), located on the right bank of the Fier. It enabled the Count of Geneva to control the road between Annecy and Chambéry in the county of Savoy, via the castle and the village of Rumilly. He thus watched the ford, and then the bridge, making it possible to cross the torrent. The position also makes it possible to control the plain spreading towards Rumilly, located at a league. The village houses a second castle, that of the lords of Hauteville, a priory of Cluny, dated 1135, and a hospital, for travelers belonging to the order of the Hospitallers, installed around 1227.The castle is mentioned in 1178. On this date, the Count of Geneva pays tribute for the castle to the abbey Saint-Maurice d'Agaune. It seems that the other half of the estate belongs to the Hauteville family. In the thirteenth century members of this family obtained the office of Geneva vidomne. They were called lords of Hauteville in 1237. In 1282, the region was at war, opposing Count Philippe de Savoie to the heiress of Faucigny, and in which the Count of Geneva also played a major role. A treaty was signed at Versoix in June 1882 between Dauphine Beatrix, Dame de Faucigny, her son Jean Dauphin, Count Amedee II of Geneva and Robert, Bishop of Geneva. By this treaty the Grande Dauphine restored to the count of Geneva the castles which his father, Pierre de Savoie, had received as a gagerie. She and her son "conceded all their rights and fiefs on the castles and mandements of Hauteville (de Alta villa) and Cessens", specifying for Hauteville, in castro and burgo. The castle, located on the margins of the county of Savoy and Geneva, is regularly a stake between the two great houses of Savoy and Geneva. In 1297, the two counts signed a treaty of peace and married their children, William of Geneva and Agnes of Savoy. By this agreement, the Count of Savoy gave "10,000 livres tournois d'dot and the castle of La Corbière to be paid homage and on condition that the Count of Geneva prevented any attack" and that of Geneva brings "4,000 livres and the Bridge in front of the castle to his son, with the castles of Rumilly in Abanais, Hauteville, Alby, Charousse as guarantee "as well as other wages. The bailiff of Chablais and Genevois, Rodolphe de Montmayeur, inspected the castle in 1303. At the beginning of the fourteenth century, Count Amedee II of Geneva stipulated in his testament that his wife, Agnes of Chalons, received the usufruct of the castles and châtellenies of Annecy, Clermont, Chaumont, La Bâtie and La Balme de Sillingy A dowry of 5,000 livres tournois, guaranteed by the possessions of Cruseilles and Hauteville. At the treaty of peace, signed at Saint-Georges-d'Espéranche, between the Count of Geneva and the Count of Savoy, William III of Geneva, acknowledged the suzerainty of the Count of Savoy for the castle. The castle was given to Agnes de Chalons in 1311. In the first half of the eighteenth century, the castle seemed ruined. In the early 1950s, Swiss archaeologist Louis Blondel described the site as "covered with ivy and invaded by bushes".For the Swiss archaeologist, Louis Blondel, "we must imagine this locality, not as a true borough with franchises, but as an enclosure or plain-castle comprising two castles, noble houses with outbuildings and a church." The chapel of the castle (capella castri) is dedicated to Saint Nicholas, while that of the hospital is dedicated to Saint Chistrophe, both patrons of travelers. These patronages are to be linked with the Passage du Fier at this place.