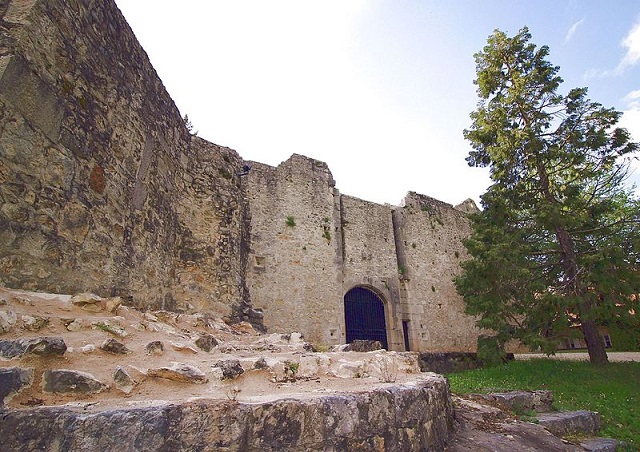 Location: Groslée-Saint-Benoît, in the Ain departement of France (Rhone-Alpes Region).
Built: 12th century.
Condition: --.
Ownership / Access: James of Groslee.
Notes: The castle of Groslée is an old castle, from the twelfth century restored in the fifteenth and sixteenth centuries and dismantled in the eighteenth century, center of the seigniory of Groslée erected in barony and then county in 1580, which stands on the town of Groslée-Saint -Benoît in the department of Ain, in the Auvergne-Rhône-Alpes region. All the remains of the castle are registered as historic monuments by decree of 5 October 1992.The castle was built, around 1180, by Jacques de Groslée, seneschal of Lyon, in the old parish of Huilieux. About 1305, the castle was part of the possessions of the Counts of Savoy. Berlion de La Mar, who lived in 1295, was the chatelain in 1319. In 1323, Jocelyne de Groslée acknowledged holding this castle and her monument in free and antique freehold of the Viennese dauphin. The castle, the village and the seigneury of Groslée were sold in high, medium and low justice, around 1420, by Antoine de Groslée, knight of the order of the necklace, descendant of Jacques, having only two daughters of Catherine De Palagnin, his wife, to Duke Amedeo VIII of Savoy, who yielded to Pierre de Bourbon, a knight. Jean de Groslée, custodian and canon-comte de Lyon, provost of Montjour, then agreed with Pierre de Bourbon to sell them to him, with the consent of the Duke of Savoy, and handed it by contract in 1455 to Jacques de Groslée, Lord of Lhuis (Chateau de Lhuis, Lhuis), his nephew, to whom he ceded all his rights. Its descendants enjoyed it in title of lordship and barony.The square dungeon of the twelfth century is surrounded by a high shirt and breeches flanked by round towers equipped for shooting with firearms.

How To Get To Château de Groslée (Map):