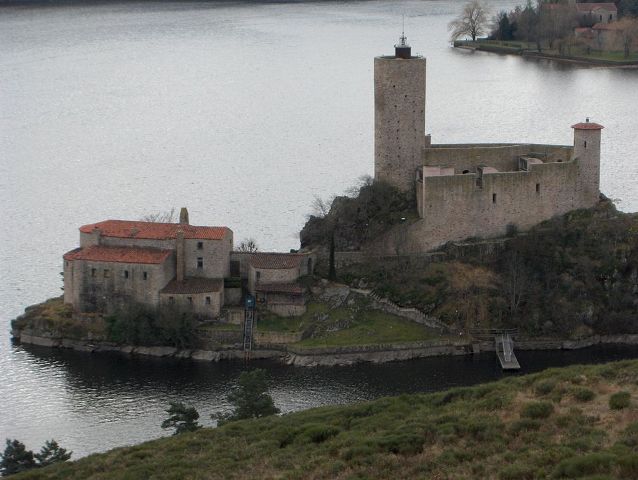 Location: Saint-Just-Saint-Rambert, in the Loire departement of France (Rhone-Alpes Region).
Built: 12th century.
Condition: In good condition.
Ownership / Access: Owned by the municipality.
ISMH Reference Number: PA00117638
Notes: Château de Grangent is on a small island in the lake Grangent overlooked by the castle Essalois; It is located south of the territory of the commune of Saint-Just-Saint-Rambert (Loire). When it was built around the year 800, the island was actually a promontory which stood about fifty meters above the river, a situation radically disrupted by the dam Grangent. During the Middle Ages and later, it undergoes destruction, reconstruction, and several restorations. The permutation 1173 between the Count of Forez and Lyon Church says that whoever Castle Grangent will liege homage and loyalty to the count. It was listed in the inventory of historical monument October 24, 1945 for the Saracen chimney of the tower, eventually the entire site consists of the tower and its surroundings was recorded March 12, 1946. The castle is now private property. The castle has also made an appearance in the film Charlie's Angels. as well as Les Ballets scarlet.