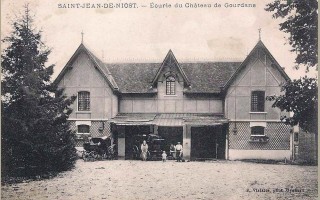 Location: Saint-Jean-de-Niost, in the Ain departement of France (Rhone-Alpes Region).
Built: 13th century.
Condition: --
Ownership / Access: Privately owned.
Notes: Château de Gourdans is a castle in Gourdans in the municipality of Saint-Jean-de-Niost. It is a medieval fortress of the thirteenth century, formerly surrounded by a triple enclosure, became a manor in the seventeenth century. The building was owned by the barons of Montolivet from 1660 to 1830 and then the Leusse family who still resides there in 2014. Originally the castle depends on the Savoy in Savoyard Viennese. The associated field is released in 1270 by Thomas III of Piedmont to benefit from Guichard, lord of Anthon and therefore the Dauphiné. Following the Treaty of Paris, Gourdans returns to the possessions of Savoy. The Lordship associated to the castle is promoted barony in 1497 by Philibert II which immediately gives in to his brother (natural) René of Savoy.