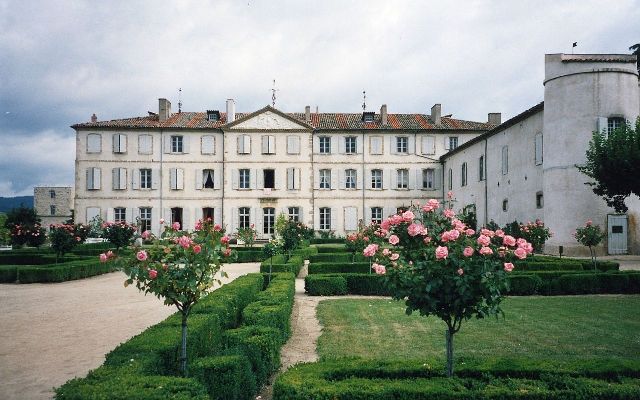 Location: Saint-Clair, in the Ardèche departement of France (Rhone-Alpes Region).
Built: 1777.
Condition: In good condition.
Ownership / Access: Privately owned.
ISMH Reference Number: PA00116779
Notes: Château de Gourdan is a castle located in France in the municipality of Saint-Clair in the department of Ardeche in the Rhone-Alpes region. Located 70 km south of Lyon, 45 km from Valencia and 4 km from the town of Annonay. This castle is the subject of a registration as historical monuments since August 30, 1967. The Lordship of Gourdan first belonged from the fourteenth century to the family of Peloux. This significant family in the area of ​​Annonay, there was a very important role, especially during the wars of religion with Nicolas du Peloux, governor of the marquisate Annonay at that time. In 1605, the castle passed into the Gourdan Vogüé family through the marriage of Marguerite du Peloux, heir to the field with Louis William, youngest son of the most important family of the Vivarais at this time, has now become the Ardèche department . Their great-son, Pierre de Vogue, began major work in 1751, he was the nephew of Marshal Villars. Since he was childless, the expansion work was completed by his nephew Felix de Vogue 1780. The estate then passed to his death in 1784 to his own nephew Eugene de Vogue, born in 1777, who became the nineteenth century president of the council and member of the house of Lords in 1828. During the Revolution, the castle could be preserved through the efforts of the widow of Felix de Vogue and mother of Eugene de Vogue. The little son of Eugene de Vogue, Eugène-Melchior de Vogüé, novelist, member of the French Academy and member of the Ardèche, sold the castle in 1869 to Gourdan industrial among the largest in the region of Annonay, showing the economic development taken by the region in the nineteenth century. The castle now remains private property whose stables are rented for receptions and three apartments in the wing of the Square Tower. The building is also registered as a historic monument since 1967.

How To Get To Château de Gourdan (Map):