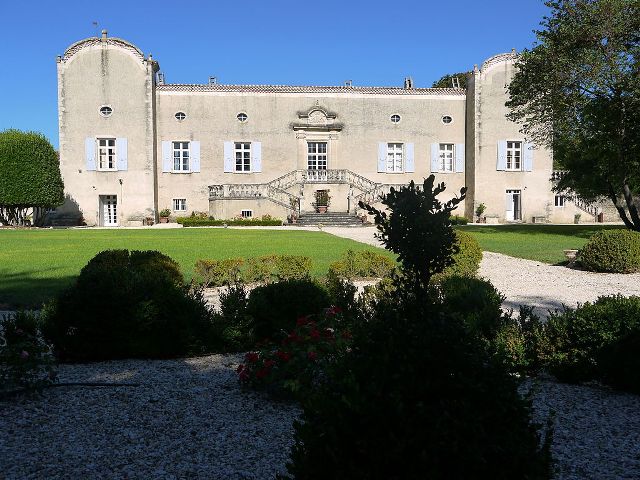 Location: Cléon-d'Andran, in the Drôme departement of France (Rhone-Alpes Region).
Built: 17th century.
Condition: In good condition.
Ownership / Access: Privately owned.
ISMH Reference Number: PA00116918
Notes: Château de Genas is a private property protected as a historical monument (ISMH), located in Cleon d'Andran, in Drôme Provençale.The central building is oriented east / west to guard the mistral. A wood north of the park used to shelter it from the wind. This building - rectangular - is in its east side, the so-called "front decor" Italian-style lends itself beautifully to put in theatrical or operatic stage because of its acoustics. It is flanked by two projecting pavilions at the ends (called "North Tower and South Tower" in the 1739 description of René Genas), with curvilinear gables topped with cupcakes. The front building, lined with sponge cakes, are served by two laterally stairs balusters. A south wing was added in the nineteenth century without upsetting the balance of the whole. One of the original Castle Genas is its double staircase with balusters, one of the few in the region, adorned either side of lions and surmounted arms of family Genas (last took to Genas supporting two lions motto "for the Faith, my Mie, my Roy" and timbrèrent crest with a crown of Marquis, surmounted by a lion, armed and crowned). The set is described in a document of the eighteenth century as follows: "the farm buildings are separated by a large courtyard of the master's apartment, which consists of a vaulted ground floor, where a chapel and a floor where is a large room in the middle of six master bedrooms, another smaller room and fireplace and some cabinets and closets, all capped with plaster cornice, floored, or fougeré properly relied tiled decorated with a garden, a lawn, a large farmyard, close wall, door and iron bars "(Archives of Valencia hospice, B. 62 and 63). Land, vineyards, field of meadows and woods then had a capacity of about 315 setérées. In the inventory can set it up in 1739 shortly before his death, René Genas described "double staircase leading to the room above, which is flanked by three rooms on the right hand and three bedroom hand "as now. Similarly, the enumeration of the vaulted rooms on the ground floor coincides with the current layout ".

How To Get To Château de Genas (Map):