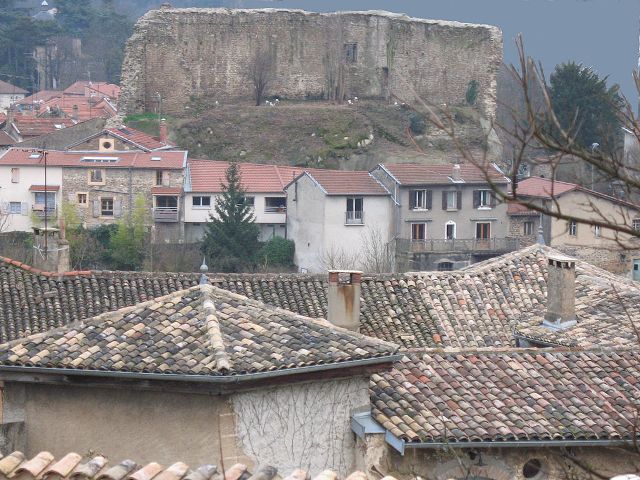 Location: Francheville, in the Rhône departement of France (Rhone-Alpes Region).
Built: 12th century.
Condition: Ruins.
Ownership / Access: Privately owned.
ISMH Reference Number: PA00117763
Notes: Château de Francheville is an ancient castle, founded in the twelfth century, the ruins stand in the town of Francheville in the Rhône department in Auvergne region Rhône-Alpes. The castle ruins are the subject of a registration as a historic monument by decree of 12 July 1982.The archbishop of Lyon Renaud Drill founded the Old Castle on the edge of the thirteenth century between 1175 and 1200; fief is owned by a lord named by the archbishops; the command of the castle extends to Oullins and Saint-Genis-Laval.In 1476, Charles de Bourbon appoints Guillaume de Quincampoix lord of Francheville. In 1514, a court tells us about the bad condition of the building; "The castle has no drawbridge and must be entered by a ladder. The gatehouse of the door chu. The walls are in poor condition, the door and the roof of the tower are rotten. The tower serving prison is ruined; the chapel, also ruined, serves fenière (hayloft). The main building is on the ground for several years. The tank of the castle is not maintained and is deteriorating, as are the walls of the keep of the castle. " In 1884 he comes to destroy the remains of the castle, but the request made by the mayor will not be implemented. Starting in 1990, reinforcing the bedrock of work is undertaken."The chat" or "Chaster" is as a polygonal enclosure on central plan with walls over two meters thick. All that remains of the original castle, built around 1200, a dungeon ruined two thirds, atop a rocky outcrop. We distinguish the ruins of the wall, a tower open to the throat, and nearly half of the south and north walls.The set consists of coarse medium sized granite stones, mortar being formed of sand and pebble clusters. The height of the walls is between 6 and 8 meters, inside, but these dominate outside ten meters; their thickness is about 1 m in the straight portions and 2 meters at the tower. A window and a brick-lined niche, are still visible.