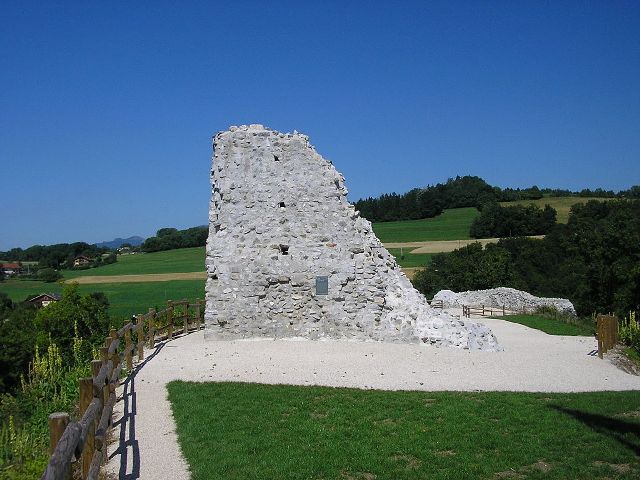 Location: Faucigny, in the Haute-Savoie departement of France (Rhone-Alpes Region).
Built: 11th century.
Condition: Ruins.
Ownership / Access: Owned by the Community of Municipalities of the Four Rivers.
Notes: Château de Faucigny is an ancient castle of the eleventh century, the ruins stand in the town of Faucigny in the department of Haute-Savoie, in region Auvergne-Rhône-Alpes. The castle was composed of two successive walls. The first speaker or low ground surrounded the castle. Trenched, she encircled the town of Faucigny. A fortified gate stood between two square towers; recent transformed today dwellings, defended access. This gate was preceded by a portcullis, which you can still see the groove, and a drawbridge. The second or high wall erected north included a Romanesque square tower mistress of 9.50 meters wide at corner buttresses which was razed in 1891. Because of its small size, it would be similar to the Bergfrieden fully preached earth d Empire and southern France. These stones were reused in the presbytery. A house was next to it and at its end there was a tower, called "Queen's Tower." That is apparently the oldest parts of the castle, built in small appliance and probably dated from the eleventh century. A description describes this home as having large rooms, well-lit kitchens, stables and a store.