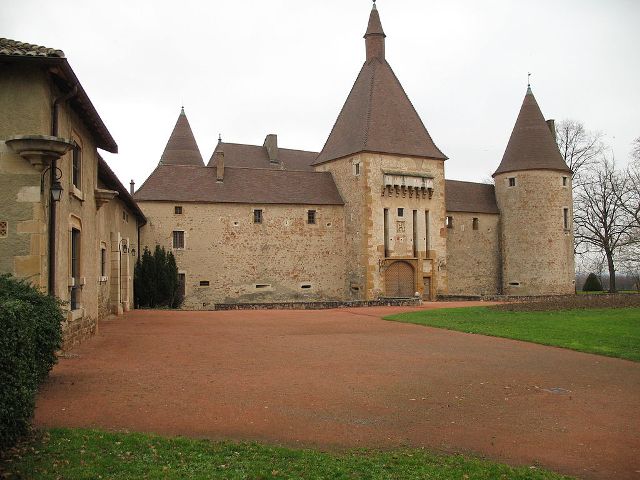 Location: Corcelles-en-Beaujolais, in the Rhône departement of France (Rhone-Alpes Region).
Built: 15th century.
Condition: In good condition.
Ownership / Access: Private property.
ISMH Reference Number: PA00117751
Notes: The Château de Corcelles-en-Beaujolais is a former stronghold of the eleventh century, rebuilt in the fifteenth century and restored in the nineteenth century, the center of the Lordship of Corcelles, which stands in the municipality of Corcelles-en-Beaujolais in the Rhône region Auvergne-Rhône-Alpes. The castle is the subject of a partial registration under the Historic Monuments by order of 4 February 1927. The original castle dates from the eleventh century. In the fifteenth century it was rebuilt to defend and monitor the surroundings and in the sixteenth century, it is transformed into manor. The stronghold was in the form of a rectangular enclosure flanked by round towers at angles6. It reached by a gate tower with battlements on consoles that preceded a double drawbridge arrows and chains thrown over ditches. The gate tower is home to the floor, a chapel. The interior includes a courtyard and main buildings leaning to one side of the curtain connected by a spiral staircase housed in a polygonal turret. The castle has retained a square tower with battlements and lantern, a courtyard and Renaissance galleries, a Gothic chapel decorated with carved wood, a carved sinks, kitchens and oblivion. vaulted cellars There is also semicircular and a large vat of the seventeenth century containing 23 oak barrels. The more than three hectares, surrounded by vineyards, includes French gardens. Private property, the castle is open to visitors.