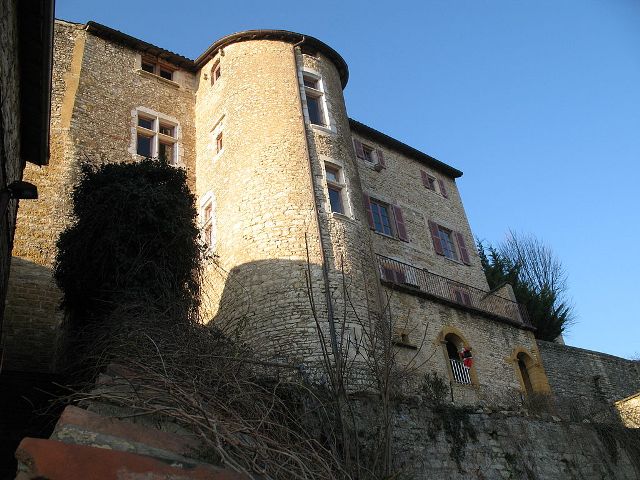 Location: Chazay-d'Azergues, in the Rhône departement of France (Rhone-Alpes Region).
Built: 15th century.
Condition: In good condition.
Ownership / Access: Owned by an association.
ISMH Reference Number: PA00117741
Notes: Château de Chazay is an ancient castle of the fifteenth century, which stands on the town of Chazay-d'Azergues in the Rhône department in Auvergne region Rhône-Alpes. Under historic monument: the carved door of the fifteenth century on the ground floor and the fireplace in the fifteenth century on the first floor are the subject of an order by ranking the June 4, 1923; the castle, with the exception of classified parts subject to registration by order of 19 January 1926; Magat tower and the remains of the castle and the old church of the Benedictine priory included in the area bounded to the North by the square of the Post, to the east by the impasse Paradise, south by the street Porteries to the west by the cadastral parcels 105, 121 and the rue du Grand-Four are the subject of a registration by order of 6 January 1938. the fortress had three speakers. In the center, the "Castellum" with the castle itself, the church, the convent and the citadel razed in the seventeenth century; there was the house of the monks, the Episcopal Palace and the housing of the lord captain. It remains a top house flanked by four corner towers and high polygonal staircase. A small castle consisting of two towers and preceded by a barbican defended the access to the enclosure. All the buildings date mainly from the fifteenth and sixteenth siècles3, however a portion could be Romanesque. A second enclosure called "castrum", which corresponded roughly to the current village to shelter the bourgeois and the lords of the area, vassals of the abbots, especially during the Hundred Years War; there was also the cemetery. Finally a third enclosure, whose walls looked directly over the countryside and had to undergo the first assaults in wartime, home to artisans, peasants and villains. The set consisted of 4 doors and 4 towers. These fortifications, there remain today that the "door of Castellum", instead of the Post, the "gate of Baboin" and the truncated tower, near the present church, which belonged to the second chamber.