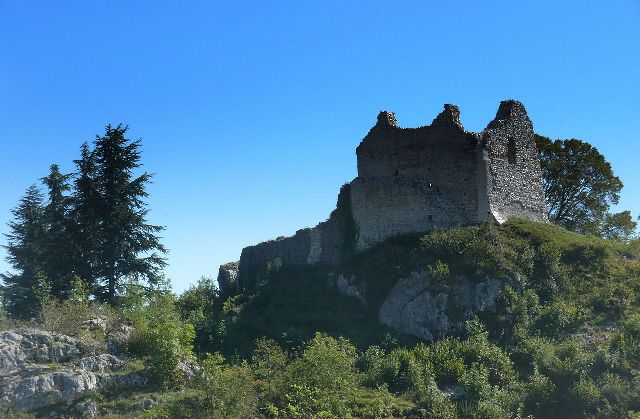 Location: Chaumont, in the Haute-Savoie departement of France (Rhone-Alpes Region).
Built: 12th century.
Condition: Ruins.
Ownership / Access: Privately owned.
Notes: The Château de Chaumont is an ancient castle of the twelfth century, the ruins stand in the town of Chaumont in the Haute-Savoie region Auvergne-Rhône-Alpes. The castle was composed of two or even three successive walls, low walls and high pregnant. One reached the first chamber or the west side castle ground after taking a path carved in the rock face leaving the town and running along the curtain of the first enclosure of twenty meters before you can access the door. From there, a path partially carved into the rock passing through the first enclosure which occupies an area of ​​over 5000 square meters and gave access to another door in the second enclosure of 2500 square meters that stood north of the mound and surrounded the castle. In this high wall, facing the door stood in the southeast corner of a quadrangular tower. The angle was probably strengthened by a round tower erected in the thirteenth century and the whole is dominated, in the northeast corner, a Romanesque tower mistress of 11 × 9 square meters. Due to its small size, it would be similar to the Bergfrieden abounded in the land of Empire and southern France. Built in small device, it is characteristic of Romanesque towers erected in the eleventh and twelfth centuries. The latter stands at the highest point of the rock against the walls, overlooking the village and a main building was attached to it. As for the great house, he relied on the curtain on the other side of the court.The main tower was the subject of a restoration in 2009.