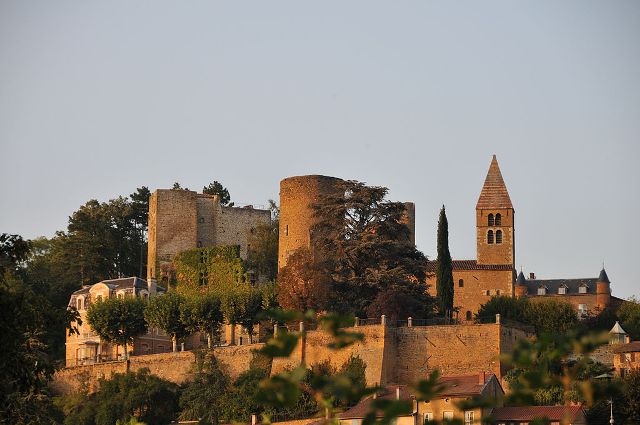 Location: Châtillon, in the Rhône departement of France (Rhone-Alpes Region).
Built: 12th-15th century.
Condition: In good condition.
Ownership / Access: Privately owned.
ISMH Reference Number: PA00117740
Notes: Château de Châtillon-d'Azergues is an ancient castle, the twelfth century, the ruins stand in Châtillon in the Rhône department in Auvergne region Rhône-Alpes. Under monument: St. Bartholomew chapel called Notre-Dame-de-Bon-Secours been a ranking by the 1862 list; castle ruins, with the exception of the already listed chapel are subject to a ranking by order of 1 October 1937. A family of Châtillon be cited at the end of the tenth or eleventh century. In 1173 the castle of Count Drill succession which gives way to the Archbishop of Lyon. In the thirteenth century3 Oingt family has possession before it passes by marriage to that of Albon. In 1260 there is mention of the dungeon in an act stipulating that "the inhabitants of Châtillon are required to work to repair the castle, but nothing can be imposed for the dungeon that caters exclusively to retirement to the Lord." The set consists of a polygonal enclosure which relies on several homes of the thirteenth the sixteenth century. A cylindrical tower of the thirteenth century, 30 meters high and 9.50 meters in diameter and 1.50 meters thick walls of stands inside the enclosure. Only its ground floor was vaulted. In the fifteenth century it is tacked on a hexagonal staircase tower which also serves the home. The oldest part of the castle is a rectangular building of the twelfth century equipped with very flat buttresses connected by arches forming the décor says "Lombard frieze." St. Bartholomew chapel, called Notre-Dame-de-Bon-Secours, dated twelfth century, next to the castle is the ancient chapel.