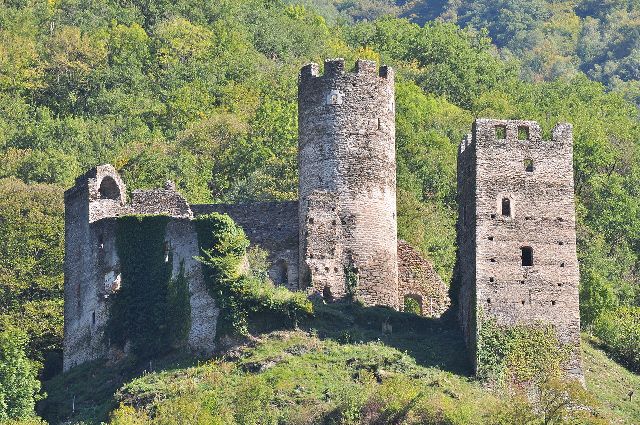 Location: La Bâthie, in the Savoie departement of France (Rhone-Alpes Region).
Built: 12th century.
Condition: Ruins.
Ownership / Access: Owned by the municipality.
Notes: Château de Chantemerle, also called château de Saint-Didier is an ancient castle of the twelfth century, central archbishop lordship of La Bâthie, summer residence of the archbishops of Tarentaise, the ruins stand in the municipality of La Bâthie in the Savoie region in Auvergne-Rhône-Alpes. The buildings of the end of the twelfth century and early thirteenth century. Château de Chantemerle is in the form of an irregular polygonal enclosure that controls a cylindrical tower archers mistress to the thirteenth century, and a square tower of the fourteenth century.4 located just below. The circular tower of 8.50 meters in diameter, built downstream side, is 22 meters high. The wall Small irregular device consists rubble drowned mortar and has a thickness of 2.65 meters at its base. It is divided into five levels planchéiés. The latter is the only one lit, others are pierced with arrow slits niche. At its peak a platform that supports a vault is lined with a crenellated parapet. Access to the tower by a door at 9 meters in height, drilled the first floor overlooking the courtyard. This gate was protected from the outside by a wooden shutter is moving on two pins placed on corbels placed above the bay. A little below, stands a flanking tower, square up, placed in front and attached to the castle by an angle. Habitable, the same material as the dungeon, measuring 8.50 meters wide, it is divided as it planchéiés into five levels, illuminated by a rectangular window. Talutée heavily at its base, its walls are high of 22.80 meters and 1.55 meters thick. Different house supported the bulwark, are arranged around the courtyard, among them, one was to receive the transplant, the courtroom, the Housing squire and his men, and an irregularly shaped tower-residence, which probably served to residential archbishops. High four floors on the ground floor. It includes a basement, a fireplace mantle with carved capitals, supported by two piers with engaged hexagonal consoles and he remains today a console and the two capitals.