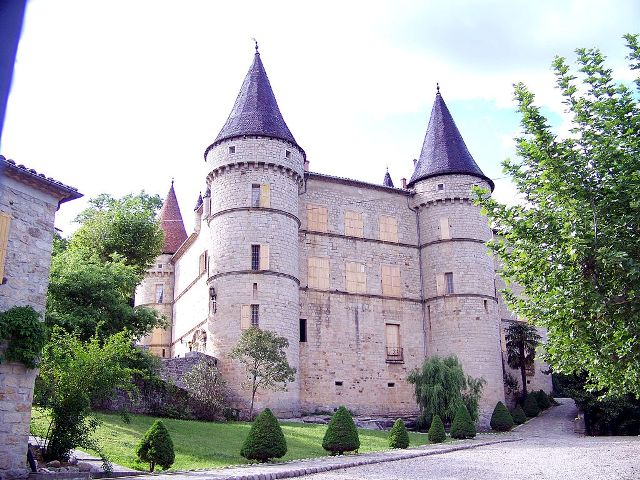 Location: Chambonas, in the Ardèche departement of France (Rhone-Alpes Region).
Built: 12th century.
Condition: In good condition.
Ownership / Access: Privately owned.
ISMH Reference Number: PA00116681
Notes: Château de Chambonas is in the town of Chambonas in the Ardèche department.The castle order and defends the passage of Chassezac flowing below and is spanned by an old Roman bridge in view of the terraces of the park. From the eleventh century, there arose a tower that was incorporated in later constructions. This would be the north tower, rebuilt to the current building. The land was originally an ecclesiastical fiefdom. Its owner, the bishop of Uzes, donated to the abbot of Saint-Gilles that called for monitoring of the ford (later replaced by the bridge) a knight of La Garde-Guérin. This became the first Lord of Chambonas. The estate remained in the family until 1808. The castle is a fortress from the fifteenth century, several times enlarged and modified, for example during the religious wars of the sixteenth century (especially fratricidal Vivarais): Chambonas then received additional towers and battlements intended to make a stronghold and give him no doubt its current appearance. Afterwards were built terraces and gardens including drawing, according to tradition, is due to Le Nôtre. Sources were captured at half a league from there to feed the fountains. Then the interior design was the subject of extensive work in the course of the eighteenth century. The Marquis de Chanaleilles, by act of 13 February 1808 bought the castle of Aloph, Charles de La Garde Chambonas, son of the last foreign minister of Louis XVI, Scipio, Charles Victor, Auguste de La Garde, third Marquis of Chambonas. The latter was ruined (including game), had incurred huge debts and his son had no choice but to sell the castle and its lands to resolve the situation of his father. In the nineteenth century, Chanaleilles, restored forty years the castle that served as garrison to an infantry company between 1792 and the date on which they had acquired. Without distorting its strong home side, a wing was added, built with materials identical to those of the main body; a gatehouse was added above the door, which the bosses reminiscent of the beautiful gate of the castle of Aubenas. The estate remained in the offspring of Chanaleilles until about 1970. It was then sold and resold after new interiors and restoration of lawns.