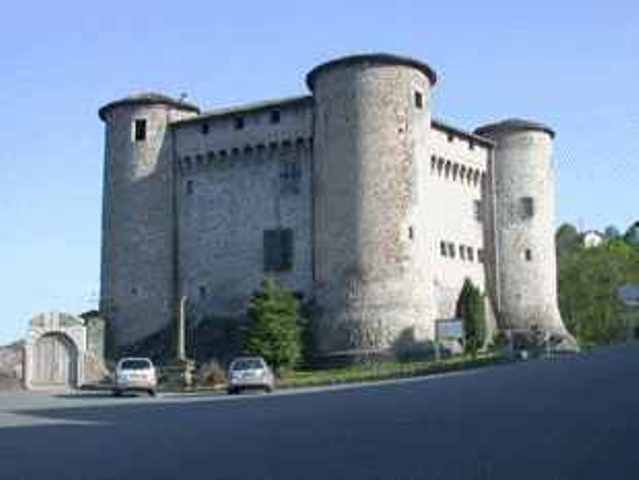 Location: Chalmazel, in the Loire departement of France (Rhone-Alpes Region).
Built: 13th-16th century.
Condition: In good condition.
Ownership / Access: Owned by an association cultuelle.
ISMH Reference Number: PA00117437
Notes: Château de Chalmazel is located in the municipality of Chalmazel, whose medieval name was Saint-Jehan-des-Neiges, in the mountains of Drill, between the towns of Saint-Étienne and Thiers, France. It dominates the Lignon Valley and was built to be an impregnable fortress according to the wish of Drill the count.The fortress was built from the year 1231 by Arnaud lord of Marcilly on order of Count Guy IV of Forez who financed the construction. The site was covered with wood and almost inaccessible. Initially it was more of a fortified house, but it was transformed into a true medieval fortress, made to be a barrier to the ambitions of powerful neighbors of the lordship of Couzan, in the hands of the family of Damascus, linked to Holy Roman Emperor. His appearance was dark and stern, with four round towers dominated by a square tower, without openings on the sides. In 1372, Beatrix, the last of Marcilly, who married in 1364, Mathieu Talaru, inherited his brother Antoine de Marcilly, died at the age of 25 without direct heirs. The Lordship of Chalmazel passed along to Talaru who were an old noble family Lyonnais After the destruction of the castle of Marcilly, the Talaru retreated to Castle Chamazel and in 1400, they built the walls in the form of a pentagonal pregnant and added battlements to keep. After the incorporation of Drill County to the kingdom of France, the Talaru served the king in his armies.During the Renaissance, the Marquis de Talaru, back from the wars of Italy, will add embellishments Renaissance style: carved facade, gallery courtyard and paintings of the chapel, sculptures. But the winters are harsh, and from 1533 the Talaru prefer to live in their castle Écotay, or in that of Saint-Marcel-de-Félines which devolves to them by marriage in 1559. Chalmazel was transformed into a summer residence and began to be abandoned. In the eighteenth century, Talaru marriage inherit the castle of Chamarande (near Arpajon, south of Paris), and they settled there to be closer to Versailles, where Louis Talaru had important duties at the Court of King and the army. They forsook the castle since 1650, making only run, as the most urgent work; the castle began to deteriorate slowly but surely. In 1850, Louis-Justin, the last of the Marquis of Talaru, 25th lord of Chalmazel, peer of France and Ambassador of France in Spain, without heir, bequeathed the castle and the woods, the St. Joseph Sisters of the community to 'establish a hospital for the township and treat patients. The sisters entrepirent few repairs (roof, parapet, reconstruction of tower) and development (hospice services and hotel rooms). Later they turned into boarding school for children of the school of Chamazel. The sisters finally abandoned the castle in 1972 and praised the town in charge of maintaining and open to the public during the summer. The castle was bought in 2002 by the politician Alain Suguenot and his family who have the drive, restore, open it to visitors and create guest rooms.

How To Get To Château de Chalmazel (Map):