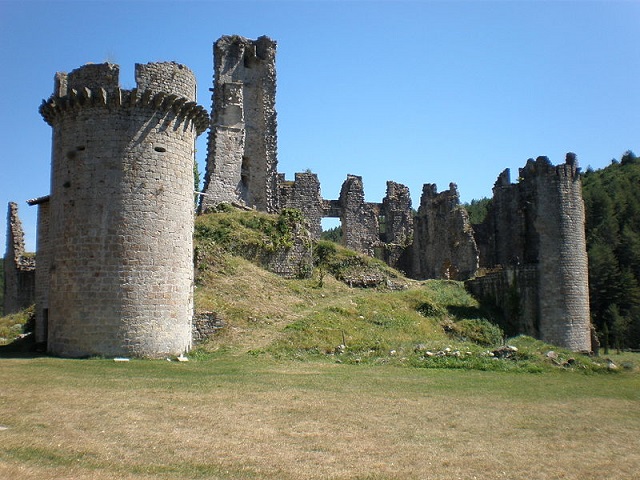 Location: Saint-Michel-de-Boulogne, in the Ardèche departement of France (Rhone-Alpes Region).
Built: 12th-17th century.
Condition: Ruins.
Ownership / Access: Privately owned.
ISMH Reference Number: PA00116798
Notes: The well-preserved ruins of Château de Boulogne are located in the municipality of Saint-Michel-de-Boulogne in the Ardèche department. The history of this castle is closely linked to that of the family of Lestrange, close to the royal court from the fourteenth century, and the marriage of the Baron of Estrange (Catholic) with Madame de la Tour-Chambaud (Protestant) was originally an episode of religious wars, and ended with the Privas Headquarters by the troops of Louis XIII. In the eleventh century, only a square tower and a chapel existed. This is the fourteenth century three large round towers and curtains are added to strengthen the building. The castle was transformed into residence renaissance in the sixteenth century to 1550. The Guard Room, the stables, the large terrace deck entry, gatehouse and its portal renaissance, with a sculpture of the head of Marie de Langeac , date from this time. The castle is in ruins but they are regularly consolidated.

How To Get To Château de Boulogne (Map):