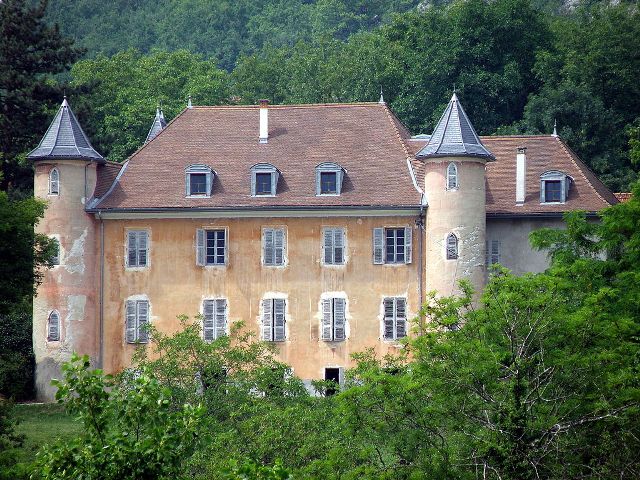 Location: Billième, in the Savoie departement of France (Rhone-Alpes Region).
Built: 16th century.
Condition: In good condition.
Ownership / Access: Privately owned.
Notes: Château de Bornessant is a castle of the sixteenth, rebuilt after the Revolution and restored around 1852 under the Old Regime seat of the Barony of Bornessant, which stands in the municipality of Billième, a French commune in the department Savoie region Auvergne-Rhône-Alpes. Bornessant Castle, built in the second half of the sixteenth, is the possession of a branch of the family Mareste, lords of Montaigre (Vieu). Claude Mareste who had acquired in 1533 from the Duke Charles III of Savoy, the stronghold, with reserves of perpetual redemption, receives, on 20 August 1565 with allegiance erection under barony. Anthelme of Mareste lives there, in 1700. Louis Bornessant of Mareste, Lord of Montaigre is March 26, 1717, godfather to Chevelu, a girl of noble François Drujon. November 19, 1722, this same Louis Arcollières wife Francoise, daughter of Pierre Arcollières, Lord of Prélian. The stronghold of Bornessant falls, still in 1722, the family of Comnenus; Claude Comnenian who has possession, transmits, in 1725, to his son, Joseph-Nicolas Comnenus, whose only son, Claude Comnène, religious, Dominican Chambéry, sells, May 31, 1753 Master Prudent Belly bourgeois Chambery. Belly keep it until 1818, or, it goes through inheritance and sharing the Dullin family Yenne. The castle was dismantled in 1798 to the French Revolution, under the order of 8 Pluviose Year II (27 January 1794) of Albitte representative. Rebuilt, it is restored to 1852 by Pierre Dullin, President of Chamber at the Chambéry Court of Appeal and cousin of Jacques Dullin, Châtelard, father of Charles Dullin. The family still owns Dullin Castle Bornessant today. Bornessant the castle stands today in the form of a big high quadrangular three floors on the ground floor. Four turrets flank angles.