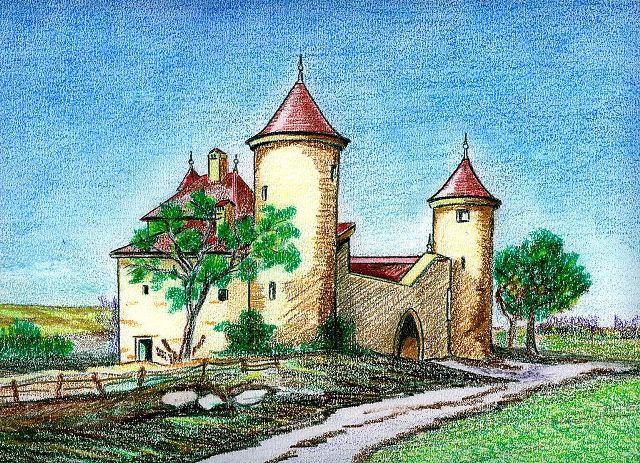 Location: Étrembières, in the Haute-Savoie departement of France (Rhone-Alpes Region).
Built: 13th-14th century.
Condition: --
Ownership / Access: --
Notes: Château d'Étrembières is a former stronghold of the late thirteenth century or early fourteenth century, rebuilt in the fifteenth and sixteenth centuries and restored in the twentieth century, which stands on the town of Étrembières in the department of Haute-Savoie region Auvergne-Rhône-Alpes. The castle is the home of the family of Étrembières; Knights of Étrembières are cited since 1201 as vassals of the counts of Geneva. It was built in the late thirteenth century. Amon Quarter, Prince Bishop of Geneva in 1309 at the castle sign an agreement with the bourgeois of Geneva. Towards 1320, it is the possession of the family Compey. Following the murder of Bernard Menthon by Philibert II Compey occurred in 1479 and his death sentence, the Duke of Savoy, confiscated all the property of the family whose Compey Castle Étrembières. In 1539 it is in the hands of Marin Montchenu. He visited 1526 family of Compey but its owner, another Philibert Compey, murders in Geneva Fribourg a canon; the castle was confiscated again. The Duke Emmanuel Philibert gives in stronghold November 9, 1559 to Francis Prosper Geneva-Lullin. In 1589 the castle was burned and its governor killed during the war between the Duke of Savoy Charles Emmanuel firstly in Geneva and the king of France on the other. important, it is delivered in a state of defense. Clemence Geneva-Lullin, who received a dowry from her father Prosper Geneva in 1589 when she married Bernard de Monthoux, no children, bequeathed to the hospital Annecy 16063 March 8, to Load the latter to pay a pension chapter of Notre-Dame-de-Liesse. In 1857, Jean-Daniel Colladon proceeded in the castle testing of a drilling machine to compressed air, after attacking the Salève, was used for the tunneling of Mont Cenis. Today it is the center of a farm.