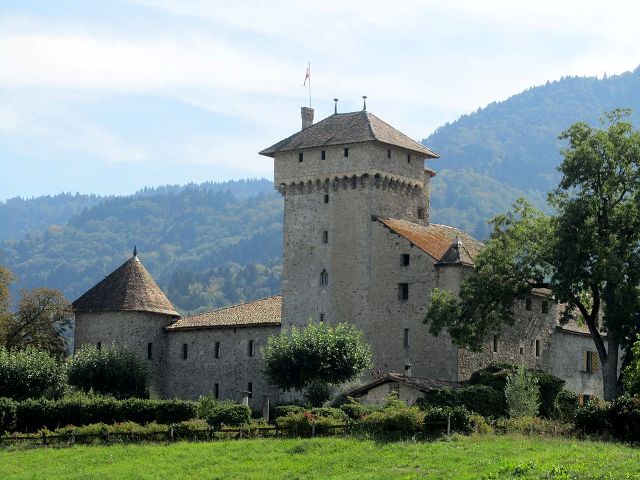 Location: Brenthonne, in the Haute-Savoie departement of France (Rhone-Alpes Region).
Built: 14th century.
Condition: In good condition.
Ownership / Access: Private property. Open to public.
Notes: Château d'Avully is a former stronghold of the fourteenth century capital of the lordship of Avully, located in the town of Brenthonne in the department of Haute-Savoie, in region Auvergne-Rhône-Alpes. The ruins of the old fortress, restored from, are subject to registration as historical monuments by order of 3 May 1974. Previously, on 30 August 1946, a decree of the Ministry of Education (section architecture), based on the law of 2 May 1930 and the opinion of the departmental committee on sites classified the entire inventory as "picturesque Haute-Savoie" on several hectares bounded by the stream of Avully, paths of Bons-en-Chablais in Armoy and the local road. In the middle of the eighteenth century, the Sales family bought the castle. The restoration of the castle by the Guyon family, abandoned since 1896, and is beginning to crumble in the 1950s, business is from 1971. It is now open to the public. Avully is a typical example of fortified houses of the thirteenth century.5 was successively adjusted and until century.5 sixteenth mode and us each time including the defense in order to adapt to the use of artillery. Château d'Avully stands today as a large rectangular enclosure 26 meters long and 34 meters, surrounded by a moat that precedes a farmyard surrounded by ramparts and ditches. The northeast corner of the enclosure has a tower in outcrop and south, in the opposite corner, a square tower crowned with battlements that houses a chapel. Square corbelled turrets provide with angles east and west. One enters the high court by a quadrangular tower holder of 10 × 5.50 meters, the base date of the fourteenth century. At its peak hounds a walkway on battlements and is flanked by a turret that houses a staircase. Inside the buildings are arranged around the courtyard; two buildings one of which opens on the ground floor with three arcades and loggias which houses a staircase of the sixteenth century the borders. The main building comprises on the ground floor, the guard room and the hall of shields; there are reproduced the coats of arms (sometimes called "Marks") of all the Savoy family. On the first floor there are rooms for ladies and Cruet, and the second room of the gentlemen and the hunting room. The exterior includes Italian gardens and the French, created by the owners, and the farmyard.