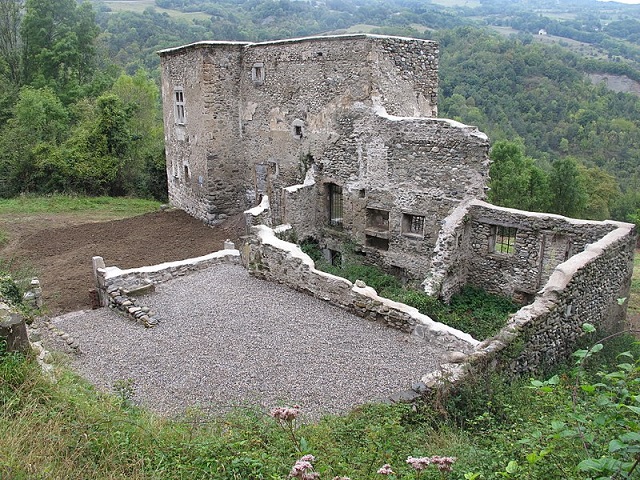 Location: Voreppe, in the Isère departement of France (Rhone-Alpes Region).
Built: 13th century.
Condition: Ruins.
Ownership / Access: Privately owned.
Notes: The Château d'Ars is a former stronghold of the thirteenth century that stands in the town of Avignonet in the Isère department and the Rhône-Alpes region. The site is labeled Heritage in Isère. The origins of this castle are not exactly known. Its owners held in the seventeenth century, the lordships of Ars and Avignonet until they are sold to the Denantes family will settle permanently in the castle of Avignonet in the early eighteenth century. In 1961, the site was bought by EDF for the construction of Monteynard-Avignonet dam and demolition possible several times for security reasons. Abandoned, the building deteriorated until in April 2000, the association "Save the castle of Ars" is created with the aim to prevent the destruction of the castle and the "freeze" to enhance its website by integrating it into a hiking trail. Much of the roof nevertheless collapses during winter 2005-2006. In June 2007, the site was acquired by the Community of Municipalities of Monestier-de-Clermont (now Community of Communes Trièves). From 2009/2010, the work of making safe and ruins of gel are undertaken and traces of painted decoration are discovered. in 2010, the site gets at the request of the association, the label "Isère Heritage".

How To Get To Château d'Ars (Map):