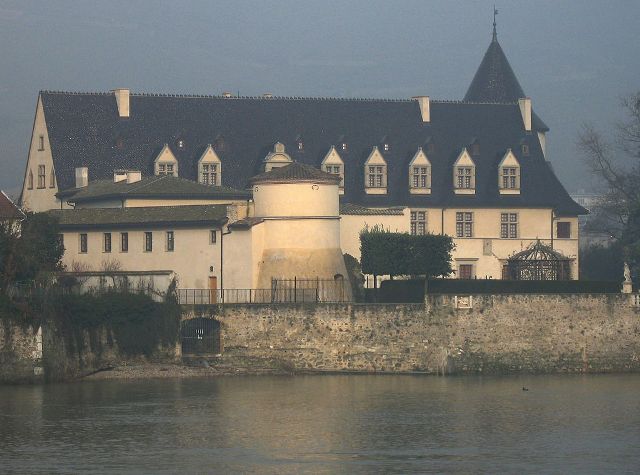 Location: Ampuis, in the Rhône departement of France (Rhone-Alpes Region).
Built: 16th-17th century.
Condition: In good condition.
Ownership / Access: Privately owned.
ISMH Reference Number: PA69000001
Notes: Château d'Ampuis is an old fortress, mentioned in the fourteenth century, very reworked in the eighteenth century that stands in the town of Ampuis in the Rhône department in Auvergne region Rhône-Alpes. The castle is the subject of a partial registration under the Historic Monuments by order of 22 July 1996. Only registered: the castle, the chapel, the entrance gate to ancient columns and pediment, the garden in front of the castle (including the retaining wall of the terrace on the Rhône and the gazebo).The "High Castle", which was located at a place called La Garde, disappeared. The "castle down" of origin, remain two of the four round towers. The main body, long rectangle oriented northeast / southwest, dated mid-fifteenth century, as the ceilings "to Serlio" on the ground floor and "fern" the first floor. To the north is a circular tower is attached to it and southwest side, it is flanked by a flag with which it forms an "L". Between 1592 and 1622, the house was remodeled in the classical style. Dovecote, built in 1653 was converted into a chapel in the nineteenth century. The main staircase and one in the south wing are from 1640. The doors are drilled in 1748. The roof consists double slope of flat tiles was redone in the nineteenth century. The ditches were filled in the twentieth century. Various buildings parallel to the south wing, complete the package. Facing the main body, the French gardens, which form a terrace facing the Rhone, have been redeveloped around 1935. A gazebo was built west corner. An English garden occupies the northern area. The castle is privately owned.