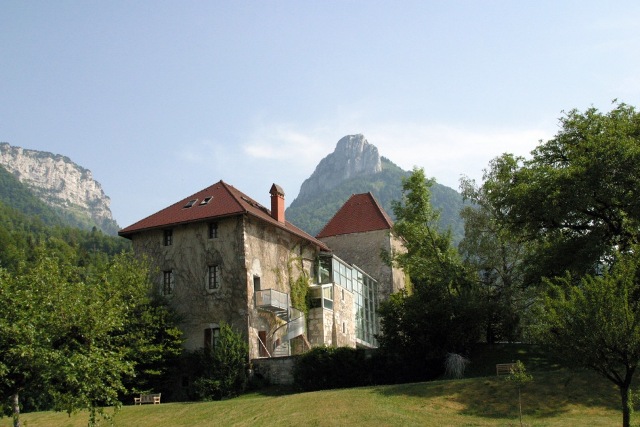 Location: Alex, in the Haute-Savoie departement of France (Rhone-Alpes Region).
Built: 14th century.
Condition: In good condition.
Ownership / Access: Privately owned.
Notes: Château d'Alex is an old fortress of the fourteenth century, the center of the Lordship of Alex, which stands on the town of Alex in the department of Haute-Savoie, in region Auvergne-Rhône-Alpes. It is now in the form of a house, oriented north - south, the lower part houses a vaulted chapel, flanked by two square towers. A spiral staircase leads double latrines at every level. In the early sixteenth century, the main building has undergone a major building campaign; the hall is seen with new fireplaces and ceiling, beams and joists assembled in respect of Jupiter, whose implementation has been dated by dendrochronology 1514. A second chapel fitted during construction of a new main building has a coffered ceiling and a stone holy water font. The kitchen has a fireplace with a wide conduit, provided with a support for the rack and a reluctance to protect the humidity salt. The death of Denis Arenthon Alex in 1706, the inventory is drawn mentions the presence next to the office archives of a firm for putting criminals and quote "big irons used to put criminals feet ". It sheltered from June 2001 to the end of 2014 the Foundation for Contemporary Art Solomon.