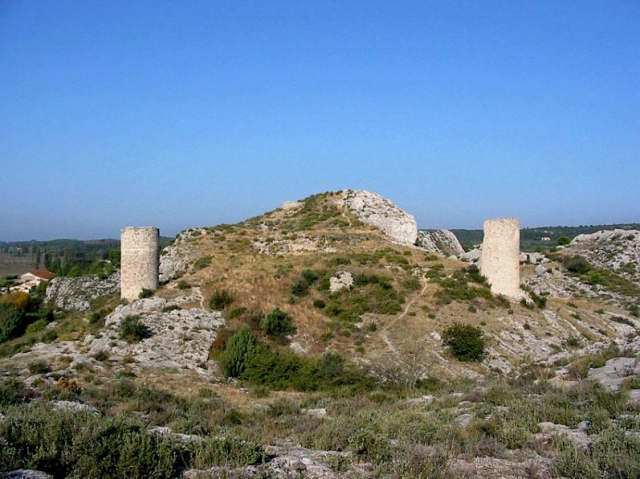 Location: Paradou, in the Bouches-du-Rhône departement of France (Provence-Alpes-Cote-d-Azur Region).
Built: --
Condition: Ruins.
Ownership / Access: --
Notes: Castillon The towers are an archaeological site located in Paradou (Bouches-du-Rhône) on the chain of Pene (Alpilles). The site was inhabited between the second century BC. BC and the fifteenth century, with a maximum population between the thirteenth and fourteenth centuries. It was then abandoned by its inhabitants who went to populate the new village a few hundred meters further north, called Paradou today. Recent archaeological excavations have allowed to reconstruct the history of this oppidum. The site can be visited today. We observe the presence of three towers still standing from the Middle Ages and which marked the boundaries of the ancient city. The wall disappeared almost in its entirety. Archaeological excavations were conducted there between 1986 and 1990 revealed the existence of this oppidum very deteriorated by time and clandestine excavations. Originally owned by the Montmajour Abbey, the site of Tours de Castillon becomes possession of the lord of Baux between the eleventh century and the twelfth century. The site allows its position to be in constant communication with the castle of Baux and monitor the communication path through the marshes Baux and leading to the Crau plain. The written sources mention the castle in the twelfth century. The thirteenth and fourteenth centuries, a rampart encloses the hill. Angles are in a first state occupied by square towers strengthened subsequently by curvilinear towers and the lists forward. A small residential area was excavated between 1986 and 1990. In this area, housing is growing in the fourteenth century and underwent many changes during its occupation. Silos, cellars and tanks have been identified. Abandonment is made progressively in the last years of the fourteenth century. The necropolis discovered on the southeast slope of the site Castillon towers, looking towards the marshes Baux, revealed the presence of five body probably dated from the Middle Ages. Only three genders of the bodies have been identified: these two men and a woman. The bodies were inside of burials supine, arms supply and legs extended. These are all adults between 21 and 45 years and they are between 1.61 cm and 1.73 cm, which is high sizes.

How To Get To Tours de Castillon (Map):