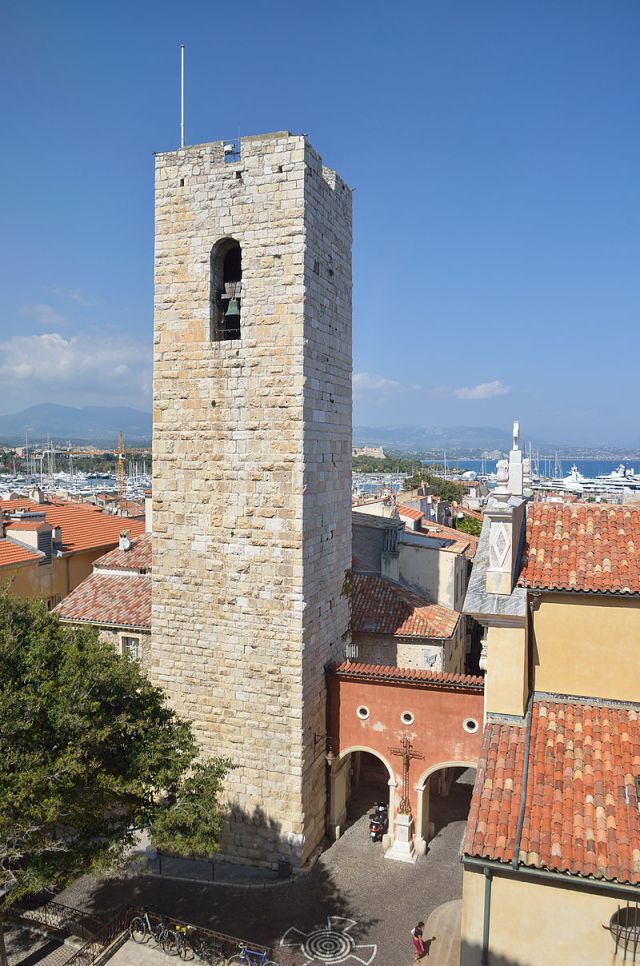 Location: Antibes, in the Alpes-Maritimes departement of France (Provence-Alpes-Cote-d-Azur Region).
Built: 11th century.
Condition: In good condition.
Ownership / Access: Owned by the municipality.
Notes: Tour Grimaldi is next to the Holy Spirit Chapel and the former cathedral of Antibes, in the Alpes-Maritimes, France.The archives have been destroyed, it can not set a date provided for the construction of the tower. It was built after the recovery of the region from the Saracens. Its construction can be dated from the late eleventh century as the tower of Suquet, in Cannes. This construction was therefore contemporary with the possession of the lordship of Antibes by family Rodoard. The Lordship of Antibes is given in 1275 to the Bishop of Grasse. The Bishop of Grasse has retained the temporal jurisdiction until the time of Clement VII who has committed, in 1383, the Grimaldi against 9000 florins. This transfer law was challenged by Martin V. The Archbishop of Embrun, he had appointed commissioner upheld the restitution of the right to the Bishop of Grasse. The case lasted, it was taken by Eugene IV who appointed the bishop of Cavaillon to try the case, which upheld the rights of the family Grimaldi. Antoine Grimaldi (died in 1358) started the branch of Grimaldi in Antibes. When Henri IV in 1608 bought the temporal jurisdiction of the Grimaldi Alexandre lordship to 250 000 pounds, he has abandoned the property to the residents of Antibes. The king had sent Antibes Guillaume du Vair, first president of the Parliament of Aix between 1599 and 1616, to take possession of the lordship in his name and establish the Governor, Lieutenant King and Major.Grimaldi tower has a height of 30 meters with a square section of 7.50 meters on each side. The wall thickness at the base is 2 meters. The siding has 70 seats in stone whose thickness varies between 0.55 m and 0.30 m. Many of these stones were recovered from Roman buildings. Some have inscriptions, are the architrave and cornice elements. The interior is divided into four floors of which the top three are roughly of equal height, and half higher than the ground floor. The ground floor communicates with the first floor by a square hole and we could go down by a ladder. The ancient gate to the tower was walled up. She was on the north side of the tower. She had her threshold to 0.60 m above the floor of the first floor, 6 m above the ground. We could reach the tower by a sliding scale. Current modern access: access to the west facade 1.40 m above the ground, and access to the facade. The second and third floors were receiving day by barbicans 0.80 m opening on each side, placed at 1 m above the floor. The openings of the third floor receiving the bells are modern. The upper platform is supported by an arch. It is reached by a stone staircase. We can deduce from this description that this tower was to be reduced in case of siege.