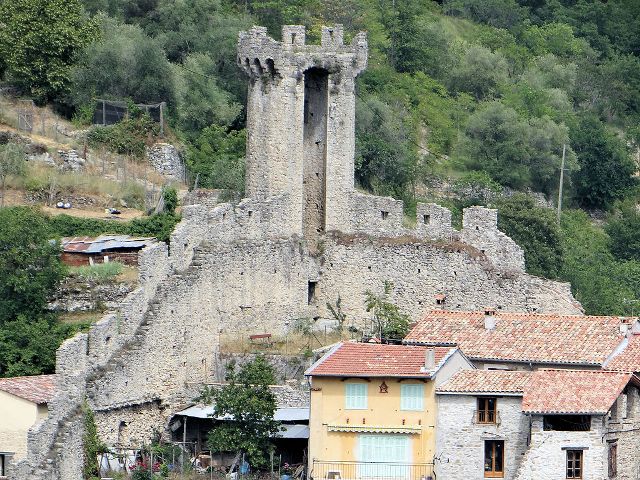 Location: Lucéram, in the Alpes-Maritimes departement of France (Provence-Alpes-Cote-d-Azur Region).
Built: 12th-13th century.
Condition: Ruined.
Ownership / Access: Owned by the municipality.
ISMH Reference Number: PA00080756
Notes: Rempart de Lucéram also called castle is what remains of the ramparts of the fourteenth century located 2 street from the tower, in Lucéram (Alpes-Maritimes).In the fifth century BC. AD arrival Ligurian who settled in Nice and in the back country. According to Louis Durante, Lucéram was the capital of the tribe of Lepontii quoted on the listing of Trophee des Alpes. This is one of the last tribes conquered by the Romans in the Alpes-Maritimes. They would then installed a military post in Lucéram to control the passage of a road linking La Turbie to the Vésubie Valley. Many Roman coins (coins, pottery) are traces of that presence. Lucéram is mentioned for the first time in 1057 (Lucerammo). A character named Luceranus or Lucerus is quoted on that date. In 1108, Lucéram is cited as a fortified place. Castle Lucéram is quoted in 1156. It is located on a promontory near a church, perhaps on the site of the St. John chapel. Romée Villeneuve intervenes in Eastern Provence with the Count of Provence Raimond Beranger IV or V to regain control and to fight against the growing influence of the Republic of Genoa who fight against Ventimiglia to control coastal cities.Charles I of Anjou Count of Provence, in 1246, by his marriage with Beatrice of Provence. On March 28, 1258 signed the Treaty of Luceram by which Boniface and George Counts of Ventimiglia sell Breil, Saorge and other strongholds to the Count of Provence Charles I of Anjou.