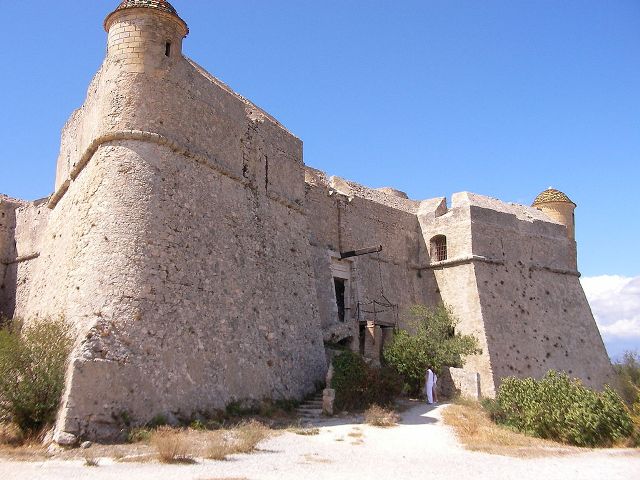 Location: Nice, in the Alpes-Maritimes departement of France (Provence-Alpes-Cote-d-Azur Region).
Built: 1557-1560.
Condition: Ruined.
Ownership / Access: Owned by the municipality.
Notes: Fort du mont Alban is a military fortification. Built between 1557 and 1560 on the eponymous hill between Nice and Villefranche harbor. In France, it is a rare example of military architecture from the mid-sixteenth century, in good condition.The headquarters of Nice in 1543, causes widespread destruction in the defensive system of the city. On a draft Gian Maria Olgiati, general military engineer Charles V, Duke of Savoy, Emmanuel Philibert decided to strengthen the maritime boundary of the Savoy States by the construction of a new fort, between the fortresses of Villefranche (St. Elmo citadel ) and Nice (Nice Castle). Its implementation is entrusted to the architect-engineer Domenico Ponsello3 under the leadership of captain general of the galleys of ducal André Provana Leyni. The first stone was laid on April 5, 1557. Ponsello builds a strong bastion in a pattern called star to meet the new techniques of artillery in use in the sixteenth century. André Provana of Leyni called "Mount Alban" (probably referring to the white limestone of the site). During the War of the League of Augsburg, the County of Nice is the scene of clashes and the fort surrendered without fight March 21, 1691 the troops of Marshal Catinat. It remains occupied until 1696. The Treaty of Utrecht makes the Savoy in 1715. During the War of the Austrian Succession, he knows a new offensive by the army gallispane (France and Spain). The fort was evacuated on April 21, 1744. After several attempts, it is recovered by the Piedmontese in February 1748. In the revolutionary offensive of 1792, he was again occupied by the French. In 1800, during the second Italian campaign, with the optical telegraph, the encircled Republican garrison can transmit from the strong messages to his command on the other bank of the Var. On 28 May 1800, he draws his last ball.In August 1927, the fort is surrounded again, this time by a huge fire that ravages all the hills of Nice. During World War II, it houses an Italian military post transmission and German. August 25, 1944, he wipes, without being touched, shells and artillery fire of the Allied navy. The superstructure buildings damaged during the latter conflict were demolished in 1948. A television relay is installed in November 1958 and 30 March 1974 a new transmitter captures a third public TV channel. In 1976, the forest area of ​​the fort is furnished with tables and benches larch. On 20 June 2006, new transmitters were opened to allow the diffusion of digital terrestrial television. Abandoned by the military authority, it becomes the property of the Ministry of Culture, as part of decentralization, the surrender to the city of Nice, candidate for his transfer in May 2007 for a symbolic one euro. Open for the first time to the public in 2010 on the occasion of Heritage Days. In 2013 it hosts for the first time an exclusive diorama that reconstructs the equipment and the lives of soldiers who could occupy it at different times.

How To Get To Fort du mont Alban (Map):