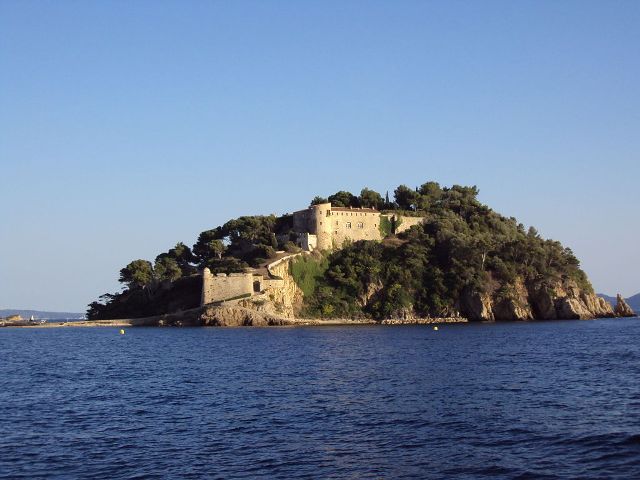 Location: Bormes-les-Mimosas, in the Var departement of France (Provence-Alpes-Cote-d-Azur Region).
Built: 13th century.
Condition: In good condition.
Ownership / Access: Owned by the French Republic.
Notes: Fort Brégançon is a state official residence used as a place of resort (mainly summer) the President of the French Republic. Today Historic Site managed by the National Monuments Centre, it is open to visitors from June 29, 2014 after some upgrading. It is located in the Mediterranean Sea on the territory of the town of Bormes-les-Mimosas (Var), on the top of a rocky outcrop 35 meters and meters of the coast of Cape Benat which it is connected by a pier (originally it was separated by an inlet). In 2005, at the request of the Regional Directorate of Cultural Affairs of Provence-Alpes-Côte d'Azur (Regional Conservation of Historical Monuments), the Elysée services accept the opening of Fort Brégançon the visit to the European days heritage. But the influx of visitors is such that the decision is made to provide a 12-minute movie introductory tours, open days in 2006. The latter, directed by "II / 3 production", allowed present at the gate of the fort a brief history and a virtual tour with the advantage of furnishing waiting 15 minutes for every 20 visitors, while allowing presentation inaccessible parts due to the configuration of difficult places 'access. The film is introduced by a welcome text of the President of the Republic, François Mitterrand, and ends with a presentation of the missions of the regional department of historical monuments. Since these openings initially limited only to open heritage days were perpetuated until 2011. October 12, 2013, François Hollande, then president of the republic, decided to further open the monument to the public and entrusted to that effect the management of the presidential residence in the Centre of National Monuments. Following the success in 2014, the Centre for National Monuments decided to open the fort for a new season of 14 May to 30 September 2015.4 The monument is open from 9h to 20h, is accessible with a guide by a shuttle private, on presentation of the voucher purchased from the Tourist Office, specifying the date and time of the visit. The visit, which must be booked in advance, is guided and lasts up to two hours.

How To Get To Fort de Brégançon (Map):