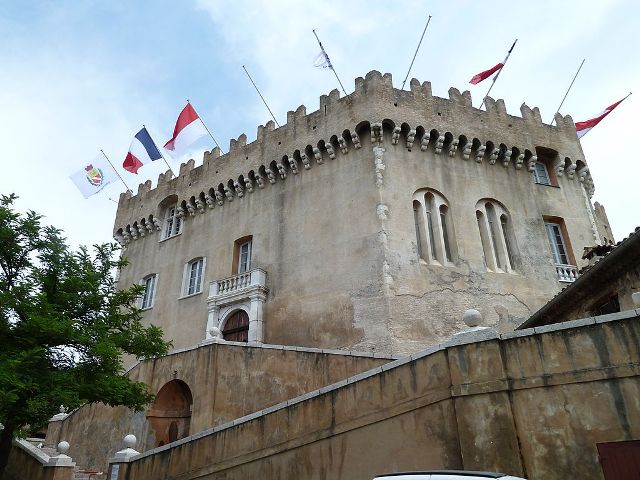 Location: Cagnes-sur-Mer, in the Alpes-Maritimes departement of France (Provence-Alpes-Cote-d-Azur Region).
Built: 14th-17th century.
Condition: In good condition.
Ownership / Access: Owned by the municipality.
ISMH Reference Number: PA00080687
Notes: Château Grimaldi is a French fort-keep of the fourteenth century castle at the top of Haut-de-Cagnes in Cagnes-sur-Mer in the Alpes-Maritimes on the French Riviera. It is now a museum since 1946 and a historic monument since 1948.A castle had to exist in Cagnes because it is mentioned in a charter of 1033. He belonged to the Viscount of Nice Nice Laugier and his wife Odile de Provence. In 1220, following the struggles between the nobility of eastern Provence to the Count of Provence, Romée Villeneuve took over the castle. This has taken a share of land to found Villeneuve. In 1250, the Count of Provence has acquired the land of Cagnes Villeneuve. In 1309 the co-seigneur of Monaco, Admiral Rainier Grimaldi I (1267-1314) became lord of Cagnes-sur-Mer ceded by the Count of Provence Robert of Anjou. He built this castle on Greek and Roman ruins, only for the ford and defense, and Grimaldi d'Antibes property until the French Revolution.1620 Jean-Henri Grimaldi of Antibes (Courbons Marquis and Baron de Cagnes, in 1646, under the protection of King Louis XIII of France and his minister and Cardinal Richelieu) transformed the medieval castle into a comfortable manor house combining the charm and the wealth of a palace in which he leads a lavish lifestyle. He did add an external staircase and restructure the interior by adding loggias courtyard. The courtroom ceiling retains one of the finest frescoes of the French Riviera, the fall of Phaeton, Giulio Benso who also directed the frescoes of the Palais Lascaris Nice.Between 1707 and 1709, the Marquis de Cagnes, Honore III Grimaldi had found a way to get money, make fake money. This situation is common in the region, the steward Cardin Lebret (1675-14 October 1734) decided to intervene with the help of Count d'Artagnan, Joseph de Montesquiou, who commanded the troops of the king in Provence between 1708 and 1710 . on 5 April 1710, the Comte d'Artagnan made a search of the castle of Cagnes where he found counterfeiting equipment in the cellar. At the French Revolution, the Grimaldi family expelled from the city and took refuge first in Nice and the castle was abandoned. Savior Gaspard Grimaldi (1734-1816), son of Honoré IV Grimaldi (1701-1743), was the last Lord of Cagnes. He took refuge in Genoa. In 1875 a special buys and restores the then municipality acquired it in 1939 and converted into a museum in 1946.The massive tower adorned with niches and battlements has two floors of arcaded galleries with a monumental double staircase. The reception rooms and ceremonial showing a baroque influences related to the County of Nice. On the ground floor, seven low and vaulted rooms provide access to a triangular patio. The top of the tower offers a beautiful view of Cagnes-sur-Mer, the Mediterranean Sea and the Alps.