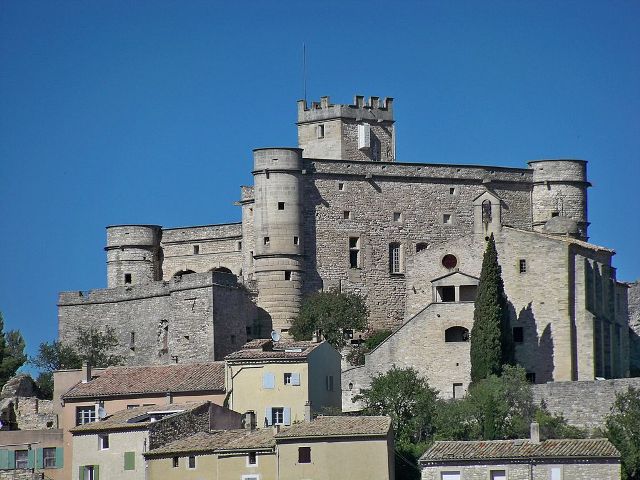 Location: Barroux (Le), in the Var departement of France (Provence-Alpes-Cote-d-Azur Region).
Built: 18th century.
Condition: In good condition.
Ownership / Access: Privately owned.
ISMH Reference Number: PA00081957
Notes: Château du Barroux is an historic monument of Vaucluse, located in the city of Le Barroux.From its inception, the castle is the stately home of the family of Baux. Until the eighteenth century, the site changes owners several times, including families of Budos from Ricavi, Peyre, Cardaillac, of Rovigliasc, Pelletier Gigondas and Noret. Undermined during the French Revolution, then by his total surrender, he falls into disrepair, until the late 1920s industrial André Vayson of Pradennes began in 1929 a restoration of the building. After the accidental death of the patron in 1939 and the occupation by the German army and arson August 21, 1944, during the World War, the restoration works are suspended. They resumed in 1960 under the direction of Dr. mécénale Mouliérac-Lamoureux. In 1983, an association, the Friends of the Castle of Barroux, takes over for safeguarding this heritage. The site is registered historic monument by decree of December 9, 1920 and historical monument by decree of May 27, 1963.

How To Get To Château du Barroux (Map):