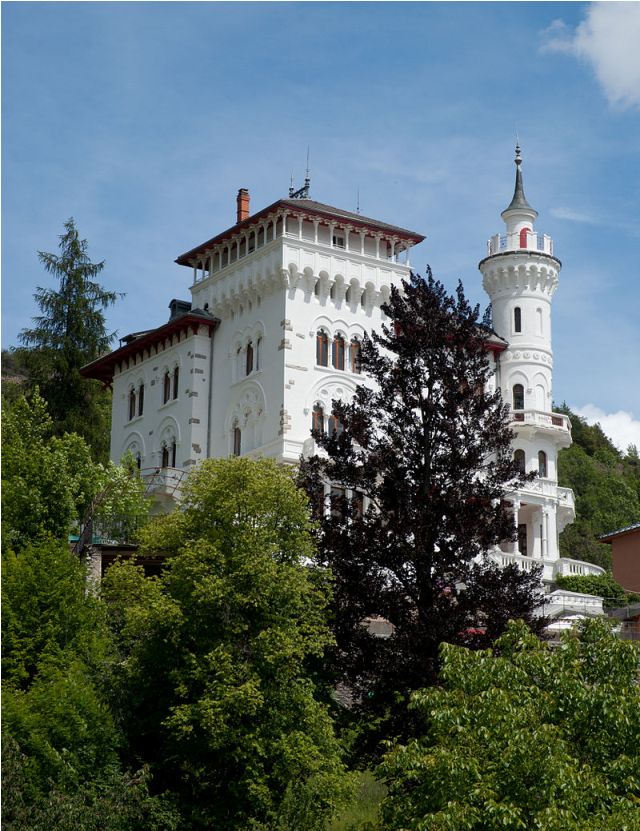 Location: Jausiers, in the Alpes-de-Haute-Provence departement of France (Provence-Alpes-Cote-d-Azur Region).
Built: 20th century.
Condition: In good condition.
Ownership / Access: Owned by a private company.
ISMH Reference Number: PA00080406
Notes: Château des Magnans is a castle located in the town of Jausiers, in the Alpes-de-Haute-Provence, France.The castle was built between 1903 and 1914 by Louis Fourtoul his return to Jausiers. The name of the castle reminded that the work of silk was an important activity in the Ubaye valley from 1720 until the epic Barcelonnettes Mexico replaces. Louis Fourtoul created his silk factory in Jausiers in 1836. It employed up to 210 people. But it closes in 1863. In 1826, Arnaud family that had a silk factory in Jausiers decides to leave the Ubaye valley to seek his fortune in Louisiana and Mexico. Fourtoul Louis decided to abandon the silk work to follow suit and hand in 1863 for Mexico. The castle clashes in the mountainous landscape. A large white building reminding the Louis II of Bavaria castle built on a plot of 2 ha including a house for caretakers, the Magnaneraie, and the castle itself comprises 29 rooms. Louis Fourtoul dies childless. The castle was transformed into a hotel. In 1964 the castle was bought by the Regional Health Insurance Fund Marseille disease that transforms the hotel to the works council of employees of Regional Health Insurance Fund of Marseille. The building's transformation involves the disappearance of moldings for a more functional decoration. These trips not making recipe, the castle is on sale in 1999. The castle was bought by an entrepreneur from Digne, then having had bids of more than 10%, it becomes the property of Sir CP Shrivastava whose wife is Shri Mataji, spiritual master of Cultual Association Sahaja Yoga who wants to install there a private school. The opposition of the inhabitants of Jausiers in this project will fail to. The unoccupied castle will continue its slow degradation. Finally the castle was bought to the association. The new owners undertook restoration work with the participation of the chief architect of historical monuments for its listed façade. The interior is renovated, three new buildings were added around. After 18 months of work, the whole becomes a guest residence with hotel services space that is open to rent in summer 2007.

How To Get To Château des Magnans (Map):