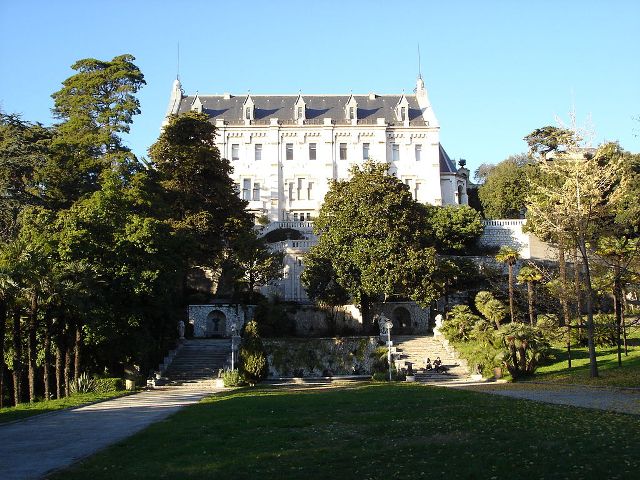 Location: Nice, in the Alpes-Maritimes departement of France (Provence-Alpes-Cote-d-Azur Region).
Built: 19th century.
Condition: In good condition.
Ownership / Access: State property.
ISMH Reference Number: PA00080785
Notes: Located in the neighborhood Valrose, castles and Valrose park is an area of ten hectares between Brancolar Avenue and the Cimiez hills, north of Nice. This is one of the few large properties Nice to retain its original dimensions. It now houses the campus of the training and research unit Sciences of the University of Nice Sophia Antipolis and the seat of the latter.February 21, 1867, Baron Paul von Derwies, entrepreneur and Russian financial advisor of Tsar Alexander II, acquiring large parcels in the valley, and created on this land, an area of the most sumptuous and extravagant of the Riviera of the late XIXth century. It seeks the services of several architects: its architects David Grimm and Antonio Crocci helped by the young architect Constantin Scala, whom he entrusts the construction of the castle, and Antoine Beranger that of the small castle. Adding a theater transformed into a concert hall is the work of Mikhail Makaroff in 1869, while the grower Joseph Carles, author of Monte Carlo gardens, makes the development of the park. The site provides work to more than 800 workers for three years at a cost of several million gold francs.The castle is Gothic and multiplies inside the luxuries with fresco ceilings, crystal chandeliers and old masters. The most spectacular is a concert hall that can accommodate up to 400 spectators provided with an imposing wood machinery visible in the backdrop. In the park, Carles introduced plant mainly from Italy, the palm trees of Bordighera and other species of Genoa and Florence. Greenhouses and rose gardens are located there. In 1873, the garden is laid kiosks, a Ukrainian hut, false ruins, caves and statues as well as numerous water features such as fountains, waterfalls and a pond where you can sail a boat. The annual renewal of lawns requires no less than seven tons of seeds. A hundred people, including gardeners, maintains the domain. In 1881, Marcel Biasini builds a monumental entrance gate flanked by twin towers, located east of the area, avenue Prince of Wales at Cimiez. When staying at the Excelsior Regina Palace, Queen Victoria with the key to the gate, like coming in next, walk in the olive grove at the top of the park.From 1870 to 1881 Valrose became a showcase of musical and social life. Baron praised the daily services of a symphony orchestra of 70 musicians directed by the greatest conductors of the time. It hosts major virtuosos including the violinist Joseph Joachim, the pianist Francis Planté diva Adelina Patti and. March 10, 1881, the mundane reach their peak at a reception in honor of the Grand Duke Nicolas. Baron died of a stroke on June 17 of that year. In 1899, the bank Von Derwies is declared bankrupt. The property is sold in 1912 to a Putilov, which resells in 1920, the king of the Bolivian tin, Simón Iturri Patiño. It changes the inscription "Van Derwies" at the entrance of Valrose Park Avenue side to put in place his own name "S. Patino" that we still see today. In 1950, the city of Nice buys the whole field and surrender to the Ministry of Education in order to install the Valrose campus, seat of the presidency of the University of Nice Sophia Antipolis and the Faculty of Science since 1965. The big castle, the little castle and the park, his folly and his statues are classified historical monuments by order of 22 July 1991.

How To Get To Château de Valrose (Map):