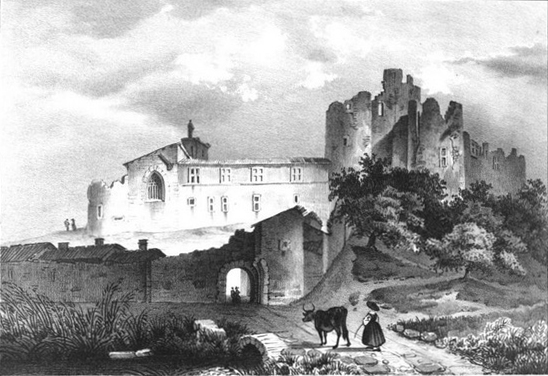 Location: Tallard, in the Hautes-Alpes departement of France (Provence-Alpes-Cote-d-Azur Region).
Built: 14th-16th century.
Condition: --
Ownership / Access: Owned by the municipality.
ISMH Reference Number: PA00080628
Notes: Château de Tallard is located in Tallard in the Hautes-Alpes, France.From the tenth century, Tallard is under the protection of the princes of Orange and until 1215, when they will transfer the land to the Knights of St. John of Jerusalem. The latter will build a Small castle on the site of the present castle before trading them in 1322 to Arnaud de Trians. He became the first Lord of Tallard and will build a castle from the existing building (ruins of the existing dwelling). In 1326, Tallard becomes a viscount with the attachment of seven surrounding parishes. As a result of inheritance, Bernardin de Clermont, descendant of Trians Arnaud, married in 1496, Anne de Husson, an heiress Countess City Thunder. This union will enable it to rehabilitate the old castle into a beautiful home by adding the body of the Guards, the manor chapel, the gatehouse and the Parc de la Garenne. However, from 1562, the religious wars will lead to Clermont exile for over 20 years. The castle becomes the scene of many battles and stirs the lust of François de Bonne, Protestants warlord.The fortress, weakened, was bought in 1600 by Etienne de Bonne Auriac that makes restore. His descendants, Camille d'Hostun, heir by his mother, Viscount and Marshal of France under Louis XIV, became the new owner. In 1692, the Duke of Savoy and his troops are attacking the castle and burned. It will be abandoned until 1897, when Joseph Roman historian and archaeologist, redeems. 1897 is also the year of classification as historical monuments of the chapel, which follow two other arrested Classification2. In 1927, the castle was sold to the Countess Blanche de Clermont Tonnerre who will work to revive it until his death in 1944. The castle is inherited by his niece, Maria Cristina of Bourbon Sicily which have not so 10 years will maintain it. It was in the 1950s that a true backup awareness of this exceptional heritage is initiated by the new priest of Tallard, Richard Duchamblo, passionate about old stones. The town of Tallard, conscious of its heritage, will buy the castle in 1957. In 1958, the body of the Guards is ranked historique2 monument, opening a period of restoration carried out under the Protection Committee of the castle of Tallard, emanation of the society Studies Hautes-Alpes. A long lease of 99 years will be signed in 1964 allowing the Company to continue his studies to work for restoration and protection: the castle was classified as a whole in 19692. This lease is finally terminated in June 2012, the town of Tallard taking the full disposal of the castle. Today, the restoration continues. Work to make the piece of the old press publicly for cultural events are planned soon.

How To Get To Château de Tallard (Map):