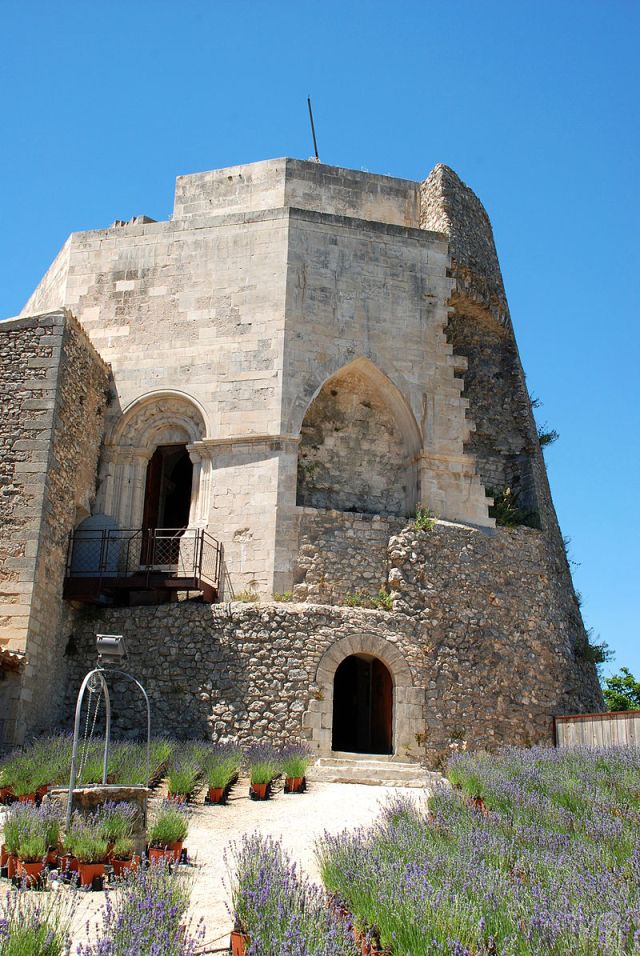 Location: Simiane-la-Rotonde, in the Alpes-de-Haute-Provence departement of France (Provence-Alpes-Cote-d-Azur Region).
Built: 12th-16th century.
Condition: In good condition.
Ownership / Access: Owned by the municipality.
ISMH Reference Number: PA04000014
Notes: Château de Simiane-la-Rotonde (or Agoult Castle) is a castle that overlooks the village of Simiane-la-Rotonde located on the Plateau d'Albion, in the French department of Alpes-de-Haute-Provence and the region Provence-Alpes-Côte d'Azur. There remains the stately home and the dungeon called rotunda, which gives the village its name. This dungeon is home to a large room which is one of the most amazing achievements of Provençal Romanesque art.The presence of a castle in this location is attested from 1031. The keep (rotunda) of the end of the twelfth century while the stately home dates from the thirteenth and fourteenth centuries. The construction of the rotunda may be between 1190 and 1210. The prevailing hypothesis is that of the chapel, built on a crypt housing the tomb of Raimbaud Agoult, who participated in the First Crusade and died in 1113. Guy Barruol interprets it as a dungeon. The rotunda is the subject of a classification as historical monuments by the 1862 list, the remainder of the castle is classified by decree June 26, 2000 for its stately home, castrale pregnant, the floor of the court, the tanks and wells, fence wall and those of support, as well as doors and other remains. Meanwhile, the castle as a whole is the subject of a registration as historical monuments by order of 18 March 1998. The main facade was restored in 18755 and important work on sealing and equipment were made in 1979-1980. The rotunda was considered a time as a lantern of the dead but that theory has been abandoned.

How To Get To Château de Simiane-la-Rotonde (Map):