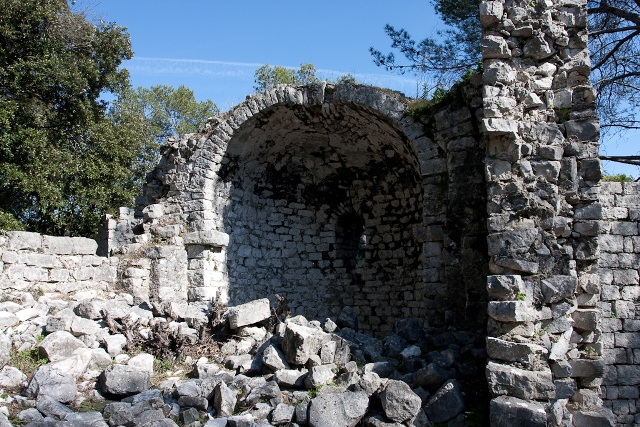 Location: Roquefort-les-Pins, in the Alpes-Maritimes departement of France (Provence-Alpes-Cote-d-Azur Region).
Built: 12th century.
Condition: Ruins.
Ownership / Access: --
Notes: Château de Roquefort-les-Pins ruins are at the top of a hill in the locality of Castellas in the town of Roquefort-les-Pins.The castle was destroyed in 1341 in dramatic circumstances as shown by an ancient text reproduced on a sign at the entry site: "Feraud Cabris, monk and prior of Rochefort, who gathered a large number of men at arms in the castles of Rochefort and La Garde, was great villainy against neighbors and passers-by, and, having grown his troops besiege Feust the chasteau of Draguignan, where mist fire and brusla those, who were in it and continuing his racing and violence by all Provence, Robert Roy gave the commission to Grasse community to seize or dispose of, which is Rochefort went to execute the order of the king, were pushed and mistreated, that the King heard that, he gave the commission to the community of St. Paul, who, having Espié time his world estoit went to the little war and it remained, with few people, all residents of Saint Paul, men, women and children were there, invest chasteau wholes sides and, estans set défence, can empescher they set fire to chasteau and that he Feust Bruslé those with touts, who were in it, as he had done in Draguignan. " (The Lords overseas Siagne, Robert Jeancard. Cannes 1952) In 2009, the site was under archaeological study and rehabilitation.