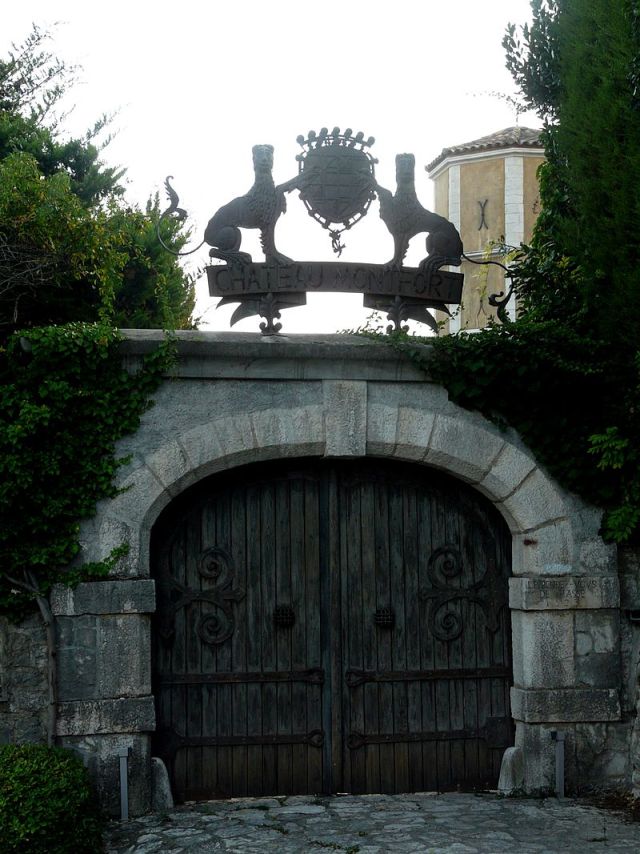 Location: La Colle-sur-Loup, in the Alpes-Maritimes departement of France (Provence-Alpes-Cote-d-Azur Region).
Built: 16th century.
Condition: In good condition.
Ownership / Access: Owned by a private company.
ISMH Reference Number: PA00080711
Notes: Château de Montfort is a castle of the sixteenth century in La Colle-sur-Loup. The castle is listed as a historic monument by decree of December 26, 1969.Montfort Castle was first a feudal castle in the thirteenth century. In 1230, he was one of Romée properties Villeneuve, Grand Seneschal of Provence, and builder of the first castle of Villeneuve-Loubet. In 1501, the castle was bought by Jean-Antoine Lascaris II, Count of Tenda and Ventimiglia, it gives a dowry to his daughter Anne Lascaris when e marrying René of Savoy, said the Great Bastard of Savoy, Count de Villars (1497), illegitimate son of Philip II of Savoy says landless, Duke of Savoy from 1438 to 1497 and Bonne of Romagnano. It is not known if the marriage was celebrated in the castle, but there are weapons of René de Savoie at the entrance. The castle was rebuilt to serve as a hunting lodge by René of Savoy. It has a Renaissance facade, a hall of honor with a timbered ceiling and a fireplace with the arms of Great Bastard of Savoy. A spiral staircase is placed in a turret. In a chapel that was placed on the landing remains an altar topped with frescoes. A castle of the entry sheet indicates Rendezvous 1523 hunt.René of Savoy was legitimized in 1499 by his half-brother Beau Philibert II after the death of his wife Yolande of Savoy. At the time of his marriage he was governor of Nice. Philibert the Fair remarried in 1501 with Margaret of Austria. She got her husband to remove the act of legitimation that he had granted. After a trial in which he lost all his fiefs in Piedmont. He still Tenda County right of his wife and of Villars. After the death of his stepfather in 1509, he is a count of Tenda and honors of this fief to the King of France, Louis XII. In 1515, after the death of Louis XII, Francis I ascended the throne. Son of Louise de Savoie, he is the nephew of René de Savoie. He appoints René de Savoie, Governor and Grand Seneschal of Provence in 1515, then Grand Master of France, in 1519. He died of his wounds after the Battle of Pavia. His son Claude de Savoie (1507-1566), Count of Tende, Count Sommerive del Bosco in 1561, Governor of Provence from 1525 to 1566, inherited the castle. There has been, in 1538, Francis I came to Villeneuve-Loubet for discussions on peace Nice providing for a ten-year truce between the king of France and Charles V. The castle was preserved and expanded over time. In 1995, the castle became the property of the watchmaker Severin Wunderman (1938-2008), owner of the company and inventor of Corum Bubble watch. He had undertaken a program of renovation and transformation of the castle. Admirer and collector of the works of Jean Cocteau he exhibited his collection in the 12 rooms of the castle and he built a swimming pool designed by the artist. He gave part of his collection to the museum Jean Cocteau - Severin Wunderman Collection in Menton.