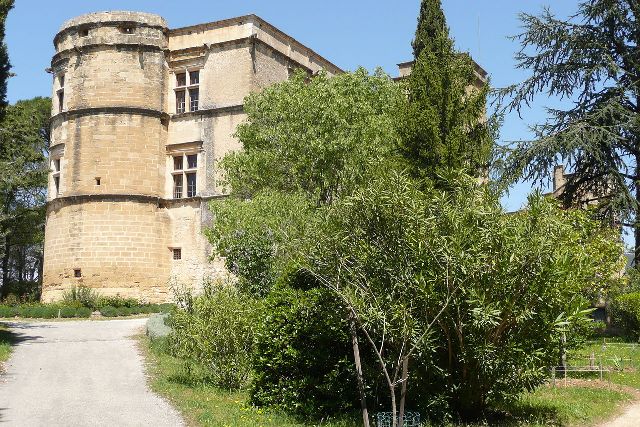 Location: Lourmarin, in the Vaucluse departement of France (Provence-Alpes-Cote-d-Azur Region).
Built: 15th-16th century.
Condition: In good condition.
Ownership / Access: Owned by an association.
ISMH Reference Number: PA00082066
Notes: Château de Lourmarin is a Renaissance castle overlooking the village of Lourmarin. Restored between 1921 and 1925 by Robert Laurent-Vibert, it now houses a cultural foundation. Many events are held throughout the year. The castle, fully furnished, is open all year to visitors. Between July 2006 and 2008, the castle of Lourmarin is the pilot site testing of a revolutionary audio guide based on vector geolocation Percipio.In the fifteenth century, the castle was rebuilt by Agoult Coots on the remains of an ancient fortress of the twelfth century. It was transformed and enlarged several times. From 1526 Louis d'Agoult-Montauban and Blanche de Lévis-Ventadour his wife are raising the Renaissance wing. Late sixteenth century, the building became the property of Créqui-Lesdiguières, owners of the castle of La Tour d'Aigues. From that time and until 1789, the castle is no longer occupied by the stewards who manage the land. After the French Revolution, the castle passed into the hands of several owners the fortunes and eventually crumble. From 1920 until his death in 1925, Robert Laurent-Vibert fact restore the castle by Henri Pacon. He bequeathed to the Academy of Sciences, Agriculture, Arts and Letters of Aix creating the Robert Laurent-Vibert Foundation.

How To Get To Château de Lourmarin (Map):