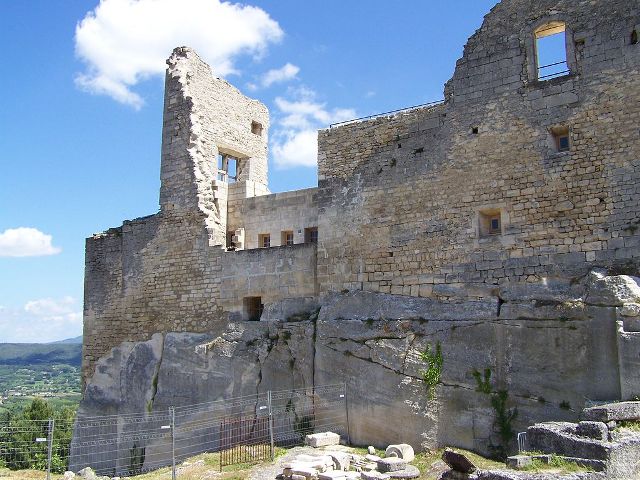 Location: Lacoste, in the Vaucluse departement of France (Provence-Alpes-Cote-d-Azur Region).
Built: 11th century.
Condition: Ruins.
Ownership / Access: Privately owned.
ISMH Reference Number: PA00082229
Notes: Château de Lacoste and La Coste is located in Lacoste in the Vaucluse department in the Provence-Alpes-Côte d'Azur.Its origin is from the eleventh century but was extensively modified thereafter. It has long remained the property of the family home after Simiane Agoult. Two hypotheses as to confront the passage of Simiane Sade. In 1627, Diane Simiane wife Jean-Baptiste de Sade, ancestor of Marquis de Sade, who then becomes the owner of the domain. In 1716, Isabelle Simiane bequeathed the castle to his cousin Gaspard François de Sade, Lord of Saumane and Mazan. The latter hypothesis is more likely. The Marquis de Sade stayed there from 1769 to 1772 between the scandal Arcueil or Marseille, and after it and fled to Italy, it fled to his incarceration at Vincennes in 1777. Escaped when transferred to Aix, he refuge there last time from July 16 to September 7, 1778 before being escorted back to Vincennes. On 21 August 1992, the castle is registered under historiques8 monuments. In 2001, Pierre Cardin buys and makes his second home. The castle is currently being renovated. Every summer, he organized in quarries west of the castle, the Lacoste Music Festival.

How To Get To Château de Lacoste (Map):