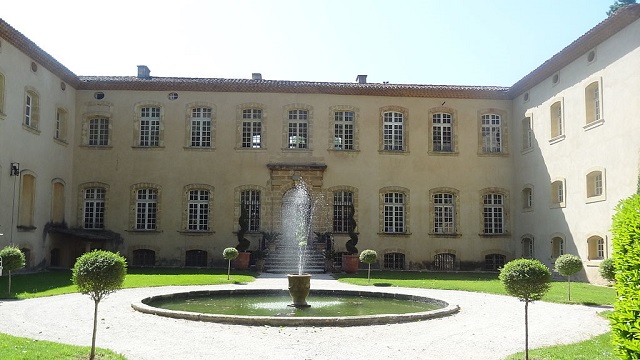 Location: Aix-en-Provence, in the Vaucluse departement of France (Provence-Alpes-Cote-d-Azur Region).
Built: 14th century.
Condition: --.
Ownership / Access: Rodolphe of Verdache.
Notes: The castle of La Pioline is located in the commune of Aix-en-Provence in the department of Bouches-du-Rhône. The old mill of Verdache of the fourteenth century, become over the centuries a sumptuous dwelling of the sixteenth century is currently a hotel and a restaurant. The castle has been classified as a historic monument since 20 January 1976.In 1303, the mill of Verdache was built in the name of its owner the lord Rodolphe de Verdache. Redeemed in the sixteenth century by Arnaud de Borilli, general treasurer of the king in Provence. It welcomes Charles V during the siege of Marseille (1524), and later Catherine de Medici. Henri III erects the domain as a fief. In the seventeenth century, Renaud de Piolenc, squire of Aix and lord of Cornillon, bought and made modifications to the facade. In the eighteenth century the castle of La Pioline was auctioned and the Marquis de Meyronnet began construction of two richly decorated wings and a courtyard with a central fountain. After the Revolution, he changed hands several times, then was left a time to abandon. An antiquary restores it and gets its classification among the historic monuments on January 20, 1976. It is now a hotel restaurant that welcomes chef Pierre Reboul since 2016.

How To Get To Château de la Pioline (Map):