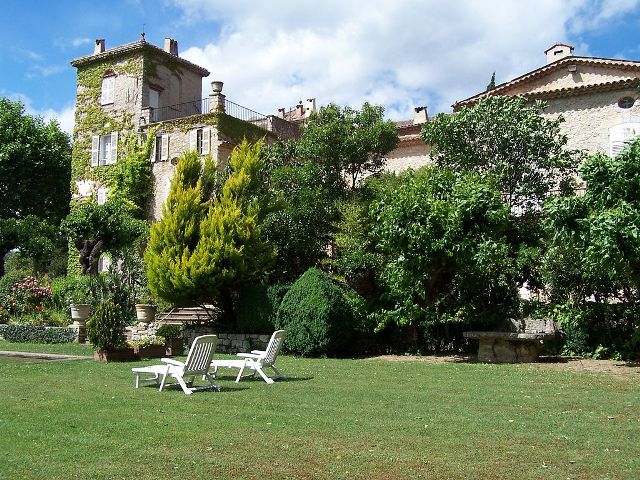 Location: Montauroux, in the Var departement of France (Provence-Alpes-Cote-d-Azur Region).
Built: 19th-20th century.
Condition: In good condition.
Ownership / Access: Privately owned.
Notes: Château de La Colle Noire located at the entrance of Fayence, is almost on the border between the Alpes-Maritimes and Var. It is built above the intersection of La Colle Noire on a promontory overlooking the plain of Montauroux. The castle is surrounded by a park in which is the Chapel of St. Anne dates from the nineteenth century but was completely redesigned by Christian Dior from 1950.In the nineteenth century, a locality named "Colle Narbonne," designated the location of an old country house of the fifteenth century, certainly the oldest house in the village, inhabited by the family Rostagno, who is currently on the road Grasse. Henri Emmanuel Poulle (1792-1877), deputy of the Var and First President of the Court of Aix-en-Provence, from an old family Montauroux, becomes the owner of an estate of over 100 hectares where is cultivated the rose scent, vines and jasmine which takes by extension, the name of the whole district, "La Colle Noire" In 1858, at the age of 66, he decided to build there a large house for his retirement. The construction will last three years (1858 to 1861). On the same ground, Master Poulle had built a chapel dedicated to St. Anne, name of his daughter Anne-Victoire and the office is celebrated by the parish priest. Henri Emmanuel Poulle also has on the heights of Montauroux, a chapel dedicated to St Bartholomew, built in 1634 by the White Penitents, which was fully decorated and furnished by anonymous artists. With a "title lost," it could be sold as a "national asset" during the French Revolution and was insulated from possible acts of vandalism during the revolution of 1870. It will switch in the heritage of Mr. Poulle.On the death of Master Poulle in 1877, the property passed to his daughter, Anne Victoire (1827-1894), married to Félix Reibaud, Postmaster. Anne-Victoire, very pious, gets to the Bishop, the parish priest of Montauroux to say Mass in the Chapel of St. Anne, in the property, on Sundays and holidays, except Christmas and Easter. Local residents then take the habit of coming to hear mass at the Chapel. During a pastoral visit of the Bishop of Fréjus, the priest complained about the increased workload and the presence of an officer for priest in "La Colle Noire" was not episodic. On the death of Anne-Victoire Poulle in 1894, his son Paul-Felix Reibaud becomes the owner. Head of Office at the Ministry of Justice in Paris, he has no use for a property in the native Var and loses interest! The property is sold to retire Pierre Grosselin, which held until 1950. In 1945, when the Allied landing takes place on the beaches of Golfe Juan Dramont and the German occupying the surrounding villages to decide revenge before retreating to regroup all the young people of Montauroux in the Castle Park to shoot them. In 1950 the property of 50 hectares was bought by Christian Dior who lived close to Callian in 1940 with her sister and father. Although large, after several years abandoned, the house is so dilapidated. The castle is now a place of reception and resorts; weddings are organized in an exceptional setting. For anecdote, the English band Oasis are recorded in part his fourth album Standing on the shoulder of giants from April to August 1999. In 2013, Christian Dior perfumes label bought the castle and leads there for three years of restoration work. The place is inaugurated May 9, 2016 and is intended to accommodate "friends of the house" (employees, customers, etc.), as well as events.

How To Get To Château de La Colle Noire (Map):