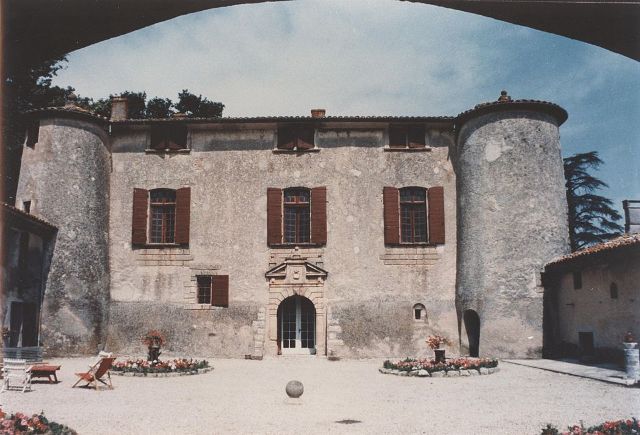 Location: Aix-en-Provence, in the Bouches-du-Rhône departement of France (Provence-Alpes-Cote-d-Azur Region).
Built: 17th century.
Condition: Ruins.
Ownership / Access: Privately owned.
ISMH Reference Number: PA00080987
Notes: Château de la Calade is located in Puyricard castle town of Aix-en-Provence, and built from 1632 on the edge of the Touloubre. It is privately owned. The entire castle and the remaining parts of the national park are the subject of a registration as historical monuments in May 2011. By order of 20 January 2015, the castle of the Calade (without outbuildings and park remained registered) is classified as historical monuments. The name of the place called La Salita has a past agreement in 1454 which orders the repair of the main road (old road of Avignon). To counter the damage caused by the swampy nature of the place and misbehavior Touloubre, it was decided to build a bridge (the RD7N going there today) but also calader, that is to say, pave pebble road called each deck access, to make it practicable after the waters receded. Thus the name La Salita will be applied around, qualify the nearby house (Castle Calade) and later designate the family who will own (De Duranti Calade). Château de la Calade was built from 1632 to Jerome Duranti, advisor to the Court of Auditors, aid and finance Provence. The architectural style favors closer sixteenth that of the seventeenth century. In the stairwell of beautiful proportions unfolds a rich decoration of plasterwork. These decorations are inspired by those found in the mansions of Aix. It originally had four towers, two of which were demolished during the French Revolution.

How To Get To Château de la Calade (Map):