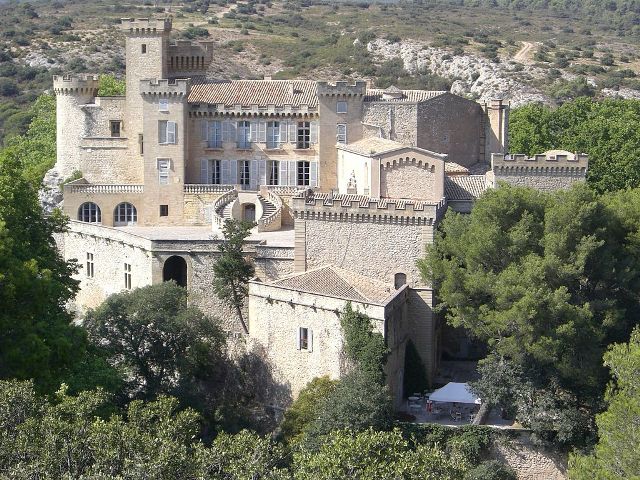 Location: La Barben, in the Bouches-du-Rhône departement of France (Provence-Alpes-Cote-d-Azur Region).
Built: 12th-19th century.
Condition: In good condition.
Ownership / Access: Owned by a private company.
ISMH Reference Number: PA00081199
Notes: Château de la Barben is located in the municipality of La Barben in the department of Bouches-du-Rhône. The castle is the subject of a classification as historical monuments since December 21, 1984.In the cartulary of the abbey of St. Victor in Marseille, the castrum Barben is already mentioned in 1009; we do not know the date of construction, probably prior to 1000. It was owned by the family Pontevès. In the fifteenth century, property of King René, the latter sold it in 1474 to Jean II de Forbin, Forbin Palamède brother, said the Great, who was the architect of the meeting of Provence to the Crown of France in 1482. It remained the property of the Marquis de Forbin for nearly 500 years. The Princess Pauline Borghese (née Bonaparte, Napoleon's sister) lived tumultuous love affair with Auguste de Forbin. The castle and the garden were classified historic monument December 21, 1984 by the Minister of Culture.the castle gardens are said to be the most beautiful of Provence, designed by Le Nôtre, creator of the gardens of Versailles. This is a regular garden with two input posterns, an avenue of plane trees, a scheduled drawing with porticos, river, four pools, two fountains, terraces. The zoo in La Barben is close.

How To Get To Château de la Barben (Map):