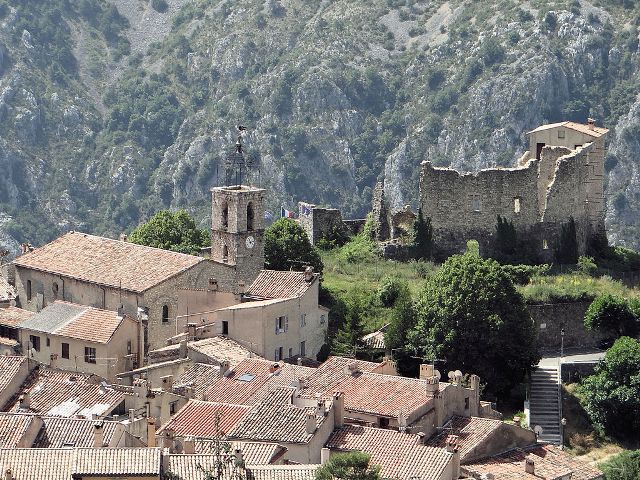 Location: Gréolières, in the Alpes-Maritimes departement of France (Provence-Alpes-Cote-d-Azur Region).
Built: 14th-18th century.
Condition: Ruins.
Ownership / Access: Privately owned.
ISMH Reference Number: PA00080745
Notes: Château de Gréolières is an existing castle already in the eleventh century in Gréolières. The castle is listed as historical monuments by order of 28 June 1976.The castle of Gréolières is mentioned for the first time in 1047. Gréolières is located on the road between Vence to Castellane. The site Gréolière, Graulieras belonged to the viscounts of Nice and stood on the Bau de Saint Jean, called Marjone facing the hamlet of Saint-Pons. Nice viscounts had built a church and a castle. Gréolières is then only a "villa" belonging to the Viscounts of Nice. Towards 1070, the Nice viscounts abandon Castle Majone to settle on the promontory of Gréolières. In 1079, the castle of Gréolières is mentioned as belonging to a family member of Nice viscounts. The Counts of Provence decided at the end of the twelfth century to take control of the eastern part of Provence fighting against the influence of the Republic of Genoa and against the independence of the local nobility.The castle was restored in the early seventeenth century. He was again bombed during the War of Austrian Succession in 1747 by the Austro-Sardinian troops. It was restored again. During the Revolution it is entered as National Property. In 1838, the family sold the castle in Vence a villager, Jacques Flory for the sum of 17,000 francs in gold.