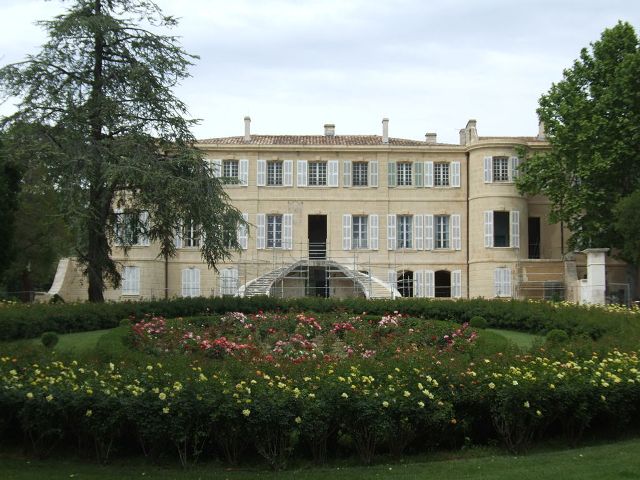 Location: Fontvieille, in the Bouches-du-Rhône departement of France (Provence-Alpes-Cote-d-Azur Region).
Built: 16th century.
Condition: In good condition.
Ownership / Access: Owned by a private company.
ISMH Reference Number: PA00081262.
Notes: Château d'Estoublon is a castle located in Fontvieille in the French department of Bouches-du-Rhône. The history of the area is mixed with that of the valley of Les Baux-de-Provence, in the Alpilles. soap frame Les Gens de Mogador, Castle of Estoublon is today known for its olive oil PDO Les Baux-de-Provence.The history of the area dates back to the Middle Ages while the property, called "Le Grand Mas" depends on the lordship of Mount Peacock, castle and farms are in turn under the rule of the Counts of Les Baux. In 1426, the death of Countess Alix des Baux, Queen Yolande of Aragon, widow of Louis II of Provence, decided to besiege the city. Les Baux, independent ground for more than five centuries resist more than four months before surrendering. Baussenc entire heritage, including the properties of Mount Peacock, is annexed to the county of Provence as adjacent land. The reconstruction of the Grand Mas is completed at the end of the seventeenth century as evidenced by the current architecture of the facade and the organization of the main house. A few years later, it is in memory of the fiefdom of Estoublon, in the Alpes-de-Haute-Provence, sold by the family grill in the eighteenth century, the castle of Mont-Peacock received the title of "Castle 'Estoublon ". In 1900, the Grand Mas, now the castle of Estoublon is sold to a Parisian antique dealer which separates a few years later after having emptied of its furniture and woodwork. The new owner, a shepherd, they say, does not drag on the area, as too large for personal use. In 1932, he sold it to the family Lombrage that attaches to restructure olive groves, destroyed by the 1956 frost. In December 1998, at the time of acquisition of the castle of Estoublon by the Schneider family, field of Estoublon looks to new horizons with the implementation of a protocol of conduct of the wine and olive crops in agriculture biological and restructuring plan of the vineyards and cellars. The management area is entrusted to Valerie Schneider, third and youngest child of Ernest Schneider and her husband Rémy Reboul.

How To Get To Château d'Estoublon (Map):