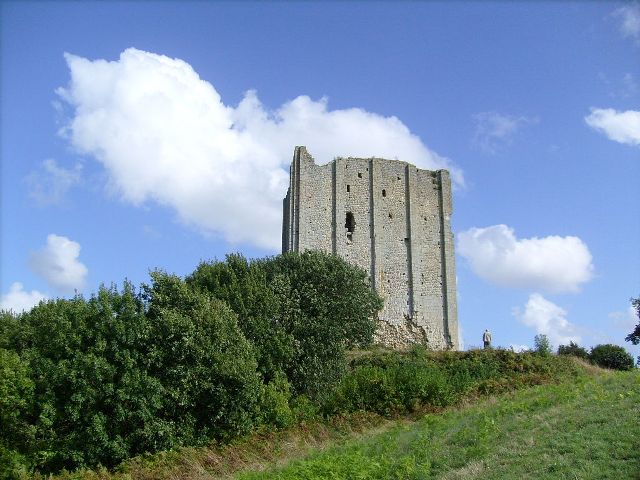 Location: Saint-Sornin, in the Charente-Maritime departement of France (Poitou-Charentes Region).
Built: 9th-11th century.
Condition: In good condition.
Ownership / Access: Owned by the municipality.
Notes: Tour de Broue is all that remains of a castle from the ninth century set on a promontory powerful (Puy Hill) overlooking the old Gulf of Brouage, and located on the territory of the municipality of Saint-Sornin in Charente Maritime. This square tower 25 meters high is classified in the inventory of historical monuments since 1925, and owes its backup to the Friends of Saint-Sornin, who financed partly a consolidation year between 1993 and 1997. Today highlighted, walking trails, a picnic area and a museum were built nearby. A trail of high marked hiking, GR 360, passes near the site.The ruins of this dungeon, built on a high hill 27 meters above the old Gulf of Brouage, are all that remains of a powerful fortress which dates back to the eleventh century. At that time, the marshes had not yet formed, and the ocean pounded the walls of this important defensive building. Brew then formed a seaport, a parish and a lordship, whose enrichment was due to the salt trade. The castle was built around a main body, a courtyard, a chapel and the dungeon itself, which then was nearly 30 meters high (it measures more than 25 meters today), the assembly being closed by a series of walls, of which there still some remains. Around the castle was a small town, there is nothing left, except for a few sections of wall half-ruined. The castle is mentioned for the first time in a charter of 1047, but there are probably in the early eleventh century when the Count of Poitiers and Duke of Aquitaine William the Great grants the Count of Anjou Fulk Nerra "Saintes and some castles ". In 1047, it belongs to Geoffrey Martel, son of Fulk Nerra, which will be the first Earl of Brew. In 1062, the Count of Poitiers Guy Geoffroy-hunting by Geoffrey Martel weapons and takes over the destiny of Brew. From 1162 to 1277, the castle belongs to the lords of Doë, before moving to the home of Rochefort until 1330, and finally home to BAUSSAY. At a time when the Saintonge, like the rest of Aquitaine was under English influence, the castle passed into the hands of Simon Burleigh, adviser of King Edward III of England, through his marriage to Margaret of BAUSSAY. In times of conflict between the armies of the King of France and England, Isabella of Valois will be chosen some time imprisoned in the castle, before being released after tough negotiations. In 1372, the castle was besieged by the constable, which takes place after a tough battle. In 1380, King Charles V granted the castle and the feudal rights and privileges arising therefrom VI Renaud de Pons. Pons of the lords keep the castle until the early seventeenth century, before finally abandoning it, because of the silting of the former Gulf, making obsolete the site of a strategic perspective. In the eighteenth century, the castle appears already ruined on maps of Claude Masse. Today preserved the tower reveals two rubble walls supported by buttresses. The remains of the ramparts, which measured originally almost seven meters high, are still visible.

How To Get To Tour de Broue (Map):