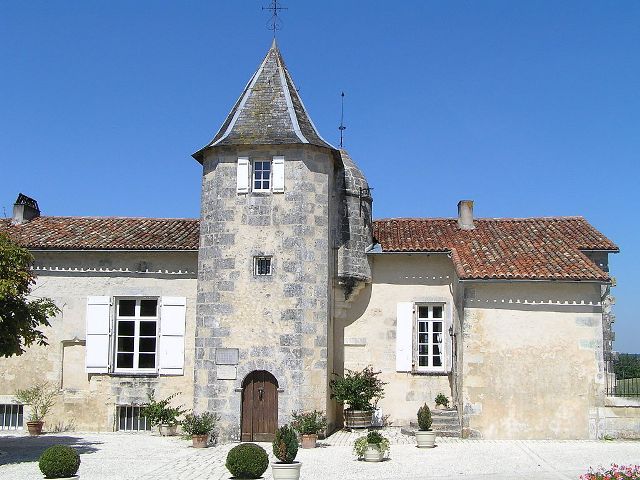 Location: Champagne-Vigny, in the Charente departement of France (Poitou-Charentes Region).
Built: 16th century.
Condition: Ruins.
Ownership / Access: Private property.
Notes: Logis du Maine-Giraud is located in the municipality of Champagne-de-Blanzac, renamed Champagne-Vigny, in Charente.The Maine-Giraud manor house dates from the sixteenth century. It belonged to Alfred de Vigny from 1827 to 1863 and lived there from 1850 to 1853. The mansion was already the center of a property and Vigny was negotiating the sale of his wine in Blanzac at Hotel Monte Cristo, Street Vault. His grandfather, the Marquis de Baraudin, bought the Maine Giraud in 1768 and the property is returned to its "sweet and spiritual" Aunt Sophie Baraudin, canoness of the Sovereign Order of Malta. Alfred de Vigny went there the first time in 1823, and then wrote: "I was in love with his melancholy and serious aspect and at the same time I felt a heavy heart at the sight of the ruins. "In his unpublished memoirs, he also writes," The breath of Terror had passed through this house. " He refuses to sell the property, the restored gradually recovering the land value, buying a used still, repairs the mansion rebuilt one of the towers. He meditated and wrote in the turret, in a small room at the top of the spiral staircase. He bequeathed the Maine-Giraud Lachaud Louise, daughter of Madame Ancelot, holding a Parisian literary salon. He then moved to Philippon, then purchased in 1938 by the Smith family, who developed and replanted the vineyard.