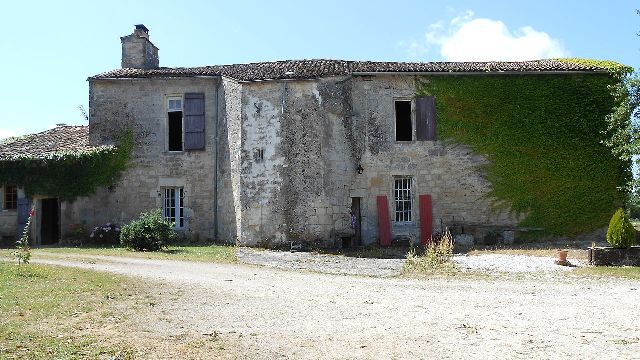 Location: Moulidars, in the Charente departement of France (Poitou-Charentes Region).
Built: 12th century.
Condition: Ruins.
Ownership / Access: Private property.
Notes: Logis de la Cour is located in Moulidars, west of Angouleme in the French department of Charente. It is built on an old castle, 200 m east of the village and the castle of Ardenne, the history of which he was bound.According to sources, the original castle of the Court was the first castle of Moulidars in the tenth century. In the twelfth century, the Ardennes was a castle tower: the Tower of Montliard and the castle of the lords of the Court were Moulidars. The ancient place name Castelnum of Curtis Molidarno attests the importance of place. The term the Court (curtis) designated the eighth to the eleventh century the center of an area that corresponded to the buildings of the warrior in charge of defending the same field and that was to quickly become the lord of the manor. The castle of the Court depended on the tenth century the lordship of Chateauneuf, while the Ardennes, built two centuries later came under the Abbey of Saint-Cybard. The term of the Court replaced the Gallo-Roman villa term. From the Middle Ages feudal life was organized around this defensive center as evidenced by the underground refuges that existed since the ninth century. Curtis is a private original construction. Moulidars farmers had spent their feudal contract with these lords of Curtis who had the title and function of the lords of Moulidars.