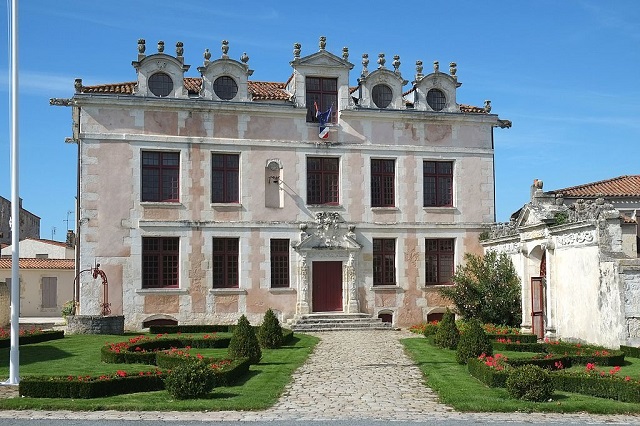 Location: Soubise, in the Charente-Maritime departement of France (Poitou-Charentes Region).
Built: 17th century.
Condition: In good condition.
Ownership / Access: Owned by the municipality.
Notes: Hôtel des Rohan yet appointed hospice Soubise Soubise on the town in Charente-Maritime, is an example of architecture under Louis XIII.In 1575, Catherine de Parthenay, heiress of the Counts of Parthenay brings the lordship of Soubise dowry when she married René II of Rohan. It was she who built in the early seventeenth century this beautiful hotel which is opposite the church. Is Huguenot, and in 1627, she and her son Benjamin de Rohan, Duke of Soubise, play a role in the Siege of La Rochelle (1627-1628). The Hotel of the lordship of Soubise is purchased by King Louis XIV in 1690 which puts it in 1691 available to Paul Vincent St. sisters to install a hospice in 1696. So it will be the hospital of Soubise for a century . After the Revolution it was during 180 years the public school of the town, and from 1982 the town hall. The Hotel was registered historic building December 8, 1928.